Two transports appear to have collided or side-swiped each other on the Montreal River Hill. Photo is from Ontario511 webcam.

Highway 17 was closed for the better part of Sunday, January 7th, 2017. A tractor-trailer carrying uranium concentrate was headed south at the Montreal River Hill when it tried to go around a jack-knifed tractor-trailer that was headed up the hill. Unfortunately as it tried to squeeze by, it got trapped, tearing a small hole in the wall of the trailer carrying the concentrate. 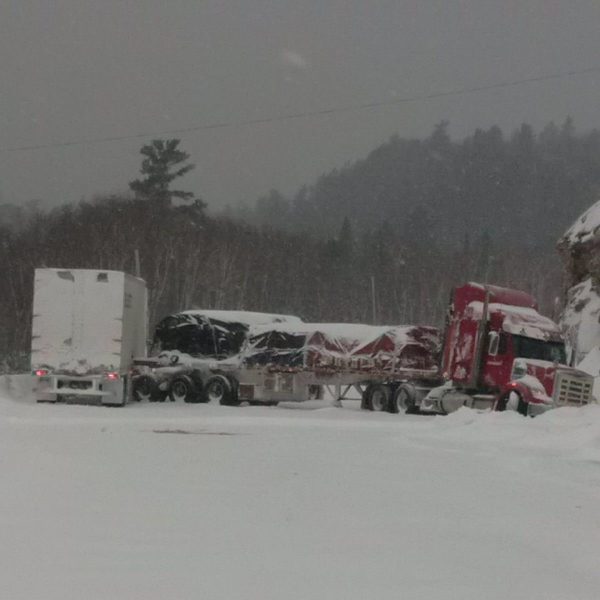 OPP tweeted this photograph of the collision at 14:05. “#OPP Superior East det. report #Hwy17 at Montreal River closed due to T/T crash. Weather is deteriorating expect delays #SeeSnowGoSlow”. There was no warning that this would be a lengthy closure due to the nature of the collision.

As with any incident with hazardous materials, potential risks are evaluated. and all safety precautions followed. The Ministry of Environment was called, and with the materials involved posing a radiation risk albeit a low one, additional safety precautions would have to be followed. In addition, a team from Cameco’s refinery in Blind River (where the transport was headed) came to inspect the trailer before it was moved. 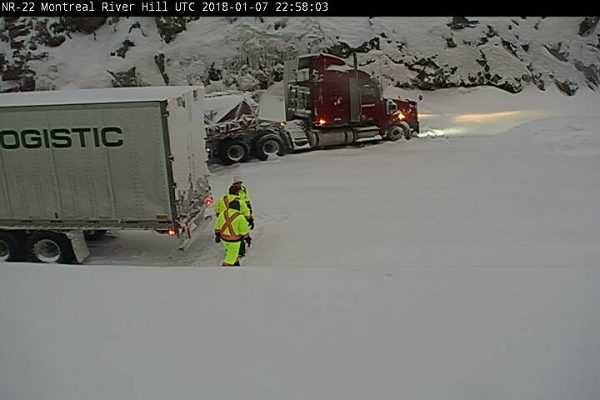 The highway was finally reopened once it was determined that it was safe to remove the trucks. Ontario511 tweeted, infoming the public that first, the southbound lane was opened from Wawa at 6:46, then northbound at Batchawana at 7:33, with OPP confirming the highway open all lanes at 7:55 p.m.

Conveniently the collision occurred at the base of a MTO weather webcam. This is a timelapse of the day. Click for it to open in a new page.

In all the highway was officially closed for 10 hours, a very long wait for those at the Montreal River Hill or at the Batchawana barricade. Superior East OPP has not yet returned Wawa-news call of this morning for information regarding this incident.