The driver of the truck was not injured. The car driver was extricated by Michipicoten Volunteer Fire Department then taken to Lady Dunn Hospital in Wawa by ambulance with serious injuries.  He was later flown to St Joseph Hospital in Sudbury by Air Ambulance.

The southbound lane of highway 17 was closed for several hours as the investigation continues. 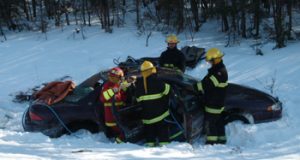