On June 2, 2020, at approximately 12:30 p.m., a member of the Superior East Detachment of the Ontario Provincial Police (OPP) was conducting speed enforcement on Highway 519 near Dubreuilville.

While on patrol, the officer observed an eastbound motor vehicle operating at a high rate of speed. The cruiser’s radar was activated and registered a speed of 144 km/h in a posted 80 km/h zone.

As a result of the stop, a 41-year-old, from Dubreuilville, was charged with the following: 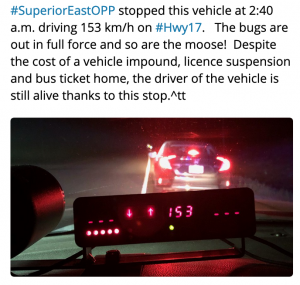 On June 3, 2020, at approximately 2:40 a.m., a Superior East officer observed a motor vehicle travelling at a high rate of speed on Highway 17 near Wawa.

The officer observed a speed of 153 km/h in a posted 90 km/h zone on the radar. As a result of the stop, a 31-year-old, from Quebec, was charged with the following:

The accused’s vehicles were both impounded and their driver’s licences suspended for seven days. Both accused parties are scheduled to appear before the Ontario Court of Justice on July 16, 2020, in Wawa.