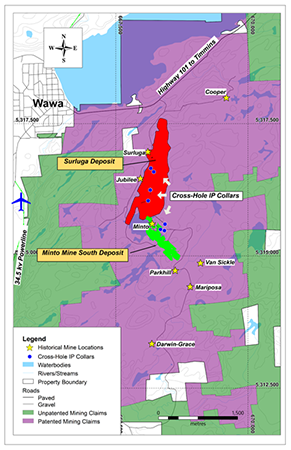 Red Pine Exploration Inc. announces the relaunching of field activities and drilling at its Wawa Gold Project, located 2 km southeast of Wawa, Ontario. The 2020 drilling program was suspended in March due to COVID-19. With strict health protocols in place, geologists are now on site to re-open camp and resume field operations this week. The drilling program will relaunch within the next two weeks. Red Pine’s programs are fully-funded and the Company was able to complete approximately 3,000 metres of a 16,000-metres drilling program before suspending operations. Results for 3 drill holes completed this winter are pending and will be announced as they are received.

2020 Drilling Program
The 2020 expansion drilling program will continue to focus on the down-plunge and downdip extensions of the Surluga Deposit to expand the current NI 43-101 resource1 both laterally and to depth.

The program is designed to:

Five holes were completed at depths of 500 to 600 metres as part of the Winter 2020 drilling program. Holes SD-20-285A and SD-20-286 were testing the deeper extension of the Jubilee Shear Zone, beyond the current footprint of the Surluga Deposit. Hole SD-20-285A intersected 5.7 g/t gold over 0.6 metres at a depth of 444 metres down-hole while SD-20-286 intersected 3 zones of high-grade gold mineralization between 541 and 567 metres (see April 2, 2020 News Release). Drill results for the remaining 3 holes will be released when they are received.

Cross-Hole IP & Resistivity Surveys
The objective of the IP program is to locate and better define the strongly mineralized gold-bearing Jubilee Shear Zone versus areas within the zone that are less prospective. The following nine (9) borehole pairs (Figure 1) will be surveyed and these results will determine continued IP surveying:

Mapping
Both the Parkhill #4 and the Grace shear zones have the potential to host mineralization comparable to what has been discovered in the Minto Mine South Deposit2. Red Pine’s drilling in 2018 intersected 16.3 g/t gold over 0.6 metres in the up-plunge extension of the zone mined in the Parkhill Mine in the 1930s and showed that the structure had lateral continuity over a strike length of at least 1.4 km (see July 12, 2018 News Release). In the Grace Shear Zone, Red Pine’s 2017 drilling intersected 57.31 g/t gold over 3.14 metres (see March 3, 2017 News Release), revealing that high-grade mineralization extends beyond the footprint of the Darwin-Grace Mine.

Trenches covering the Parkhill #4 and the Grace Shear zones were dug last fall, but the early snow precluded any further work. The 2020 mapping program will: 1) gather well-constrained structural data to refine the Company’s targeting matrix in those structures; 2) confirm the potential 900-metres strike length of the Grace Shear Zone to its intersection with the southern extension of the Jubilee Shear Zone; 3) include fieldwork in the extension of the Jubilee Shear Zone where trenching and channel sampling in 2019 identified promising zones of mineralization.

COVID-19 Update
To date, the Company has had no suspected nor confirmed cases of COVID-19 and it has implemented specific protocols to protect its employees, contractors and the community where it operates. The Company initiated a work-from-home policy for corporate and non-essential exploration staff. Following the public guidance from the Ontario Government and the Ontario Health Authority, in  addition to adhering to a strict hygiene protocols, the Company will be operating its drill program with a reduced work force, a rotational work schedule and designated work areas to limit interaction between staff and reduce the chance of virus transmission.