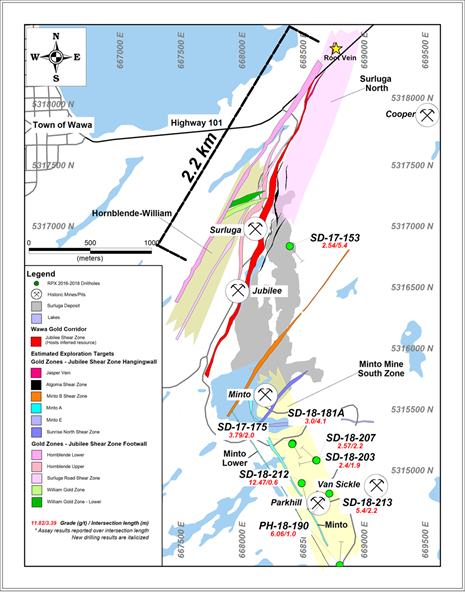 Red Pine Exploration Inc. announces results from twenty-two holes from its 2017-2018 drill program at its Wawa Gold Project, located approximately 2 kilometres (km) east of Wawa, Ontario. The discovery of this gold zone (Minto Lower Zone), parallel to the Minto Mine South Zone, is significant as it extends for over 1.5 km and its high-grade mineralization has the potential to increase the property’s gold inventory. 3D modelling suggests that veins of the newly discovered Minto Lower Zone may be associated with the historic Parkhill Mine with an average recovery grade of 0.25 to 0.3 oz/ton (8.57 g/t to 10.28 g/t gold) (Tisley, 1986).

Quentin Yarie, President and Chief Executive Officer of Red Pine stated, “We continue to expand the footprint of the Wawa Gold Project with each new gold-bearing structure found. The discovery of this additional 1.5 km long gold-bearing structure correlates well with our understanding of the gold mineralization at the Wawa Gold Project. We plan further testing with mechanized stripping and additional drilling.”

Table 1. Highlights of the 2017-2018 drilling results in the Wawa Gold Corridor

Discoveries in the Minto Gold Corridor
Red Pine’s drilling and preliminary surface mapping indicate that the newly discovered Minto Lower Zone is parallel to the Minto Mine South Zone, has a strike length of at least 1.5 km, and remains open to the south. The modeling of the structure in 3D also reveals that the No. 4 vein mined historically at the Parkhill Mine is part of the Minto Lower Zone. According to Tisley (1986), the No. 4 vein in the Parkhill Mine had an average recovery grade of 0.25 to 0.3 oz/ton (8.57 g/t to 10.28 g/t gold) for an average stope thickness of 1.83 to 2.44 metres with wider zone reaching up to 4.9 metres.

Red Pine has initiated the mechanized stripping and mapping of the new Minto Lower structure to better understand its geometry and characterize the structural controls on gold distribution. Once completed, the Company will conduct some additional exploration drilling in the area.

Wawa Gold Project Background
Since December 2014, Red Pine’s exploration work has involved the sampling of 42,000 m of historic core that was never sampled by previous operators of the project and aggressive drilling campaigns. To date, the Company has completed over 50,000m of drilling and made five discoveries along the extension of the Surluga Deposit: the Surluga North Zone; the Hornblende-William Zone; the Minto Mine South Zone, the Minto Lower Zone; and the Grace-Darwin Zone. These are part of the Wawa Gold Corridor, a gold-mineralization zone that extends for more than 5 km.

Red Pine’s on-going drill program is designed to potentially expand the size of the existing inferred gold resource and connect the other zones of gold mineralization along the newly-discovered Wawa Gold Corridor.

The Company is well positioned to fund its share of the Wawa Gold exploration program.

As such, the sampling and drill programs are expected to continue through 2018.