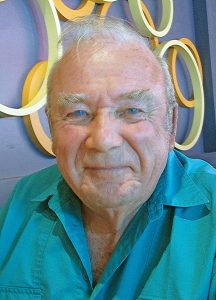 Leslie was born on July 27, 1927 in Winnipeg, Manitoba.  Leslie moved around for a bit before residing in Toronto where he met his first wife, Margret whom he married on October 18, 1947.

Leslie and Margret had 2 children born to them, Allan, and Lindy, before settling down in Wawa, in 1966. Leslie worked for General Electric from 1947 to 1960.  After leaving General Electric he worked for Algoma Steel from 1960 to 1966 in Sault Ste. Marie and then Algoma Ore from 1966 until he retired.

He was a WWII Air Force veteran who served on the home front in Canada.

He was a member of several service clubs including the Rotary Club of Wawa, the Royal Canadian Legion, and an active member of the local Anglican Church.

He enjoyed many pastimes including golf, curling, fishing, and travelling after his retirement.

After Margret passed away in 2007, he met his second wife, Phyllis.  He moved from Wawa to Florida in 2010 where he lived until Phyllis’ death in 2016. After her death, he moved in with his daughter Lindy and her family until he could no longer care for himself and was admitted to the Maxville Manor Nursing Home in Maxville, ON.

Leslie will be loved and missed by surviving family: his daughter Lindy, her husband Paul, and his grand-daughter Kerri, and many friends and cousins,

Donations may be made to a charity of your choice.

Sol Mamakwa – Statement on National Day for Truth and Reconciliation