From the Branch – 73th Airborne Walk in Oosterbeek and Arnhem 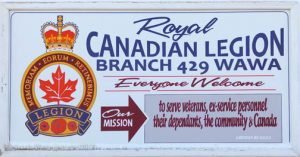 Seventy-five years ago, another major event happened when our Canadian soldiers liberated the town of Antwerp and took the harbour which was still mostly undamaged and was planned to be used for supplying the Allied armies. The Allied Command had a big celebration but forgot to invite the Canadians who were already moving North to the Leopold Canal and the Dutch border.
This weekend there was another anniversary with the 73th Airborne Walk in Oosterbeek and Arnhem, 1 week prior to the September 17th remembrance of the start of the battle of Arnhem and Operation Market Garden. More than 30.000 people took part and walked from the dropping zones via the war cemetery to the Arnhem Bridge and the more than 1,000 children who accompanied their parents had a good history lesson.
At the Wawa Branch, we have next Thursday, September 12 for our Membership Meeting. Plan to attend!
To all our Comrades sick at home, in the hospital or nursing homes, you are in our thoughts and prayers and we wish you well.

From the Branch – August 25

From the Branch – June 3

From the Branch – December 4

From the Branch – October 9

From the Branch – September 25