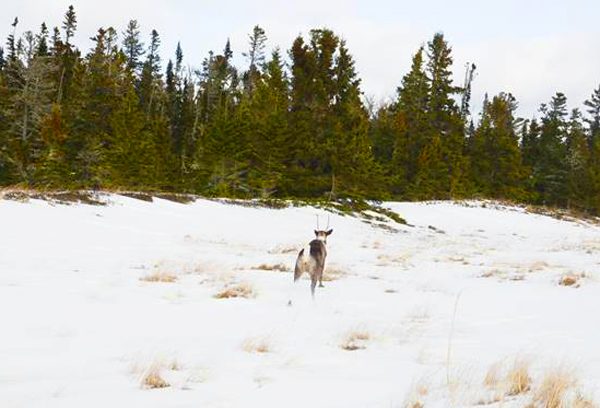 One of the female caribou after her release on Caribou Island.

Q:  What is the current status of the caribou around Lake Superior?

A:  Not good.  The caribou on the mainland may now be all gone.  Recently, there were still thought to be some along the north shore from Pic Island to west of Cape Victoria (Marathon to Rossport).  But local residents say no one has seen any animals or sign there for a few years now.  The Slate Islands used to have a high population, but a pair of wolves went out to the islands in 2014 and eliminated all the caribou there except for 2 to 4 bulls.  Michipicoten Island also had a very large caribou population (likely well over 800 and maybe close to 1000), but wolves also went out to there in 2014 and have almost eliminated the caribou.  In an attempt to salvage the population from extirpation, the MNRF moved 9 caribou to the Slates from Michipicoten in January, and 5 caribou to Caribou Island from Michipicoten in February in partnership with the Michipicoten First Nation.  So when the Michipicoten Island caribou are gone this winter, there will only be 16 to 18 caribou left in the Lake Superior population.  That’s down from close to 1000 animals 4 years ago.

Q:  What is being done to prevent the loss of the Lake Superior caribou?

A:  The Michipicoten First Nation and a handful of local people have been pushing the MNRF to act to conserve the Lake Superior caribou.  Many of you also wrote to the Ministry or your MPP about this – so public pressure undoubted helped – thank you.  As a result, the MNRF have arranged 2 caribou moves to salvage the population:

Q:  What’s next with the Lake Superior caribou?

A:  In the short term, we are still pushing the MNRF to move 1 or ideally 2 more bulls to Caribou Island to augment the 1 lone bull there now.  There are 3 main reasons for this:

If you would like to help out with the conservation of the last of the Lake Superior caribou, please write to Nathalie Des Rosiers, the Minister of Natural Resources and Forestry and ask her to move another 1 or 2 caribou bulls to Caribou Island to secure the backup population of the Lake Superior caribou. There are not many caribou left on Michipicoten Island so write her today.  Her email address is: