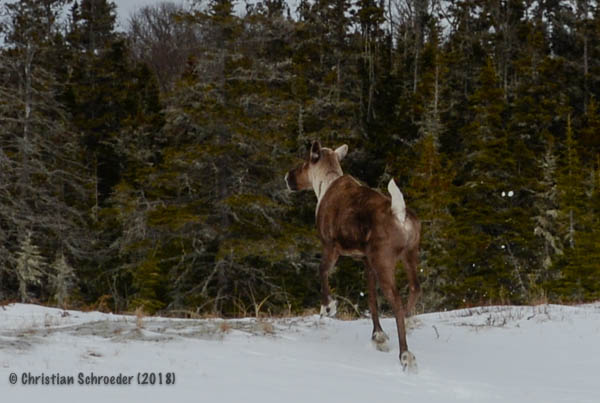 With Saturday’s transfer of a bull from Michipicoten Island to Caribou Island the future is looking a little brighter for their survival.

An effort was made in January to translocate some caribou to the Slate Islands. Ten were transferred back to the Slate Islands (1 was euthanized after transfer for unknown reasons). This population is still at risk, and will always be at risk, as it is fact that wolves can reach the island when an ice bridge forms.

The group continued to advocate for a second removal of animals to Caribou Island, a nature preserve close to the US/CDN border south of Michipicoten Island. Under the guidance of Serge Couturier (Quebec), who has captured almost 2,000 caribou, five (4 cows and 1 bull) were moved. In addition to this move, the group wanted to have at least one more bull moved, ensuring that there was more than one ‘father’ for the new calves.

At this point though, the spectre of money/funding came up. The cost had become a barrier. With the aid of The W. Garfield Weston Foundation’s financial support, it was possible to move another bull from Michipicoten Island to join the others on Caribou Island. After waiting for favourable weather, the move took place on Saturday, March 10th. A very healthy bull, perhaps 300 pounds was moved from Davieaux Island to Caribou Island. 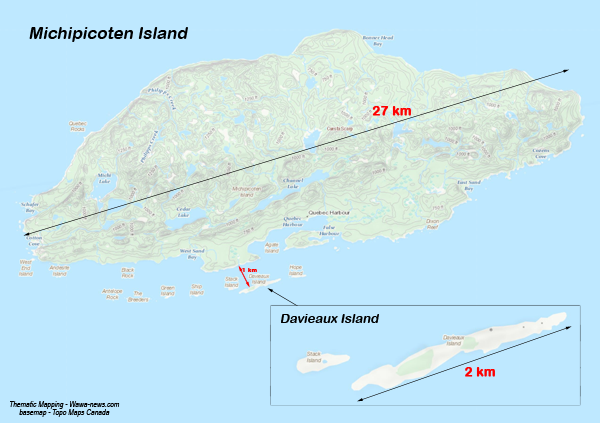 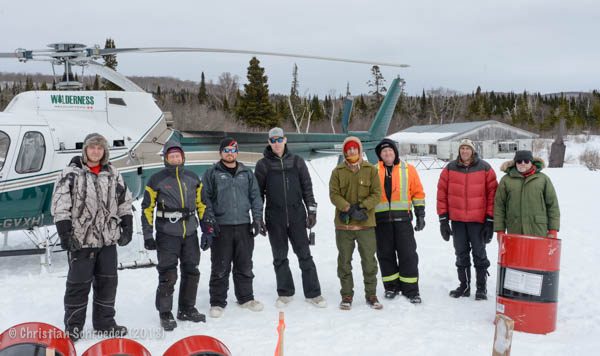 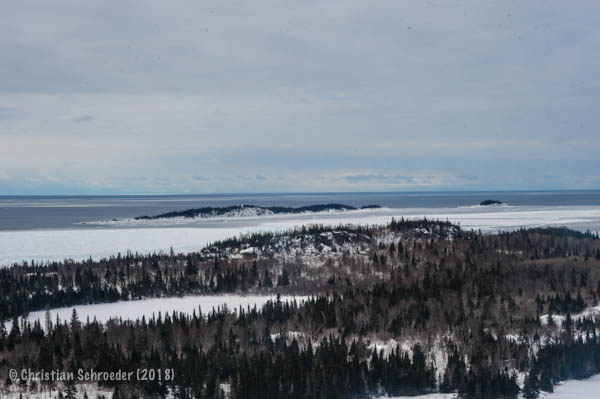 The first step was to get ready. After landing in Quebec Harbour, Michipicoten Island, Chayse, the netman, was made safe with the door off the helicopter. With the net gun in hand, Chase was ready. With Davieaux Island only a few minutes away, the capture crew was ready to find a bull. There were actually four caribou; two bulls and two cows, living on the island since late last year. The capture crew had to find them and net a male; all from the air.

Two were located, and slowly they were herded by the helicopter to a more open area (to make net-gunning possible). Serge explained, “This situation, there is so few animals, small islands, rocky islands. This was the most difficult situation I have ever dealt with in my career. I have captured close to 2,000 caribou in my career. I have been capturing since 1987, and this was the most difficult.”

Leo estimated that there is less than 10 animals left on Michipicoten Island. The chain of islands (including Davieaux) has become a refuge for the caribou, as the wolves cannot swim there. However, the ice is beginning to reach out and may create an ice bridge, putting these last animals in danger. “This was our last chance to try and get one off of those smaller islands.” 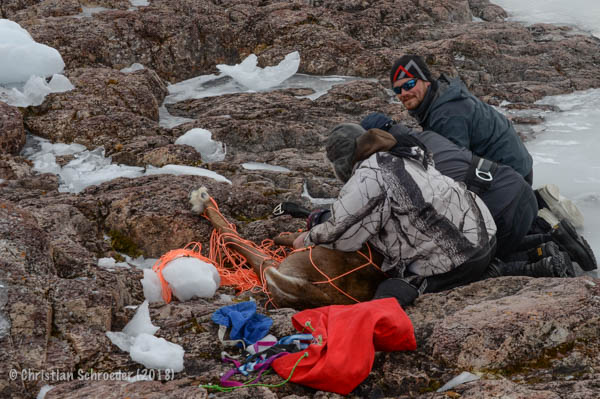 Untangling the net, after blindfolding and hobbling the bull.

Serge showed some raw footage of the capture, said “you can see Davieaux Island and the other islands, it’s almost frozen there. So the wolf can reach Davieaux maybe this week.” As soon as they were over the island, they saw the first animal running between the trees. Watching the video, it was difficult to see the caribou beneath the pines and trees. The best location to fire the net gun was at the other end of the island, so they began to carefully herd the caribou with the noise of the helicopter. In a matter of a couple of minutes, the opportunity for a shot was there – miss, the net fell in front of the animal.

The helicopter came around, and a second shot was taken – miss. It isn’t easy to fire the net gun. It weighs 20+ pounds, and then with the force of the flying – 60 pounds. It really is up to the pilot to put the animal in front, so the gun can be fired successfully. Back on Michipicoten Island, the transfer helicopter and crew was waiting. The timeline was for one hour, that would give them enough time to fly a caribou to Caribou Island and return to Wawa, safely. Leo explained, that as the hour went on, they were standing at Quebec Harbour, getting sick to their stomachs. “We could hear the noise, and know we are running out of time. counting and hoping that they succeed, but you cannot see what is going on. So, it was pretty tense.” 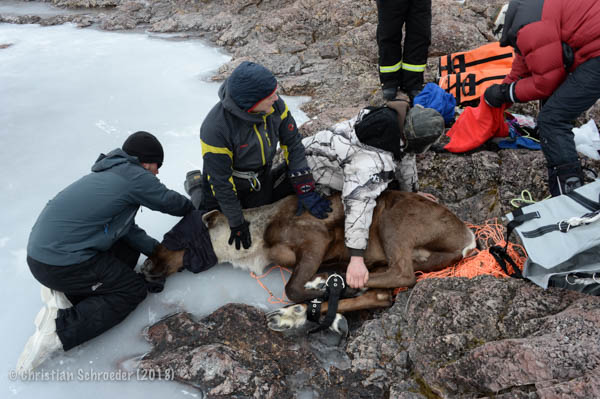 You can see the hobbles and blindfold. The net is beside the caribou bag. 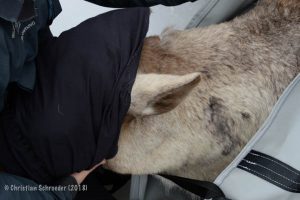 Here is the scarring on the bull’s neck from a wolf attack.

Running out of time, they took a chance on one animal that Chayse pointed out. It was standing on the edge, perhaps it was planning to escape to the water… then it seemed almost as if it was challenging them to come and get him. He moved about 20-30 feet away from the edge, and Chayse had his shot – capture!. Danny lowered the helicopter, and Serge jumped out to pin the caribou. Success!

The call was made to the other helicopter to blindfold, earplug, hobbles, unwrap the caribou from the net, and place it in the caribou bag. Time was of the essence, as not to overstress the bull. The crew had to carry this caribou to the WiskAir helicopter, all lending a hand to carry this 300lb animal (they had to take 3-4 breaks because of the weight).

Serge said, “This was one of the largest animals I have seen. He was healthy and in good body condition, even though we are at the end of the winter.” This caribou had a close encounter with wolves and survived – carrying the scars on his neck. 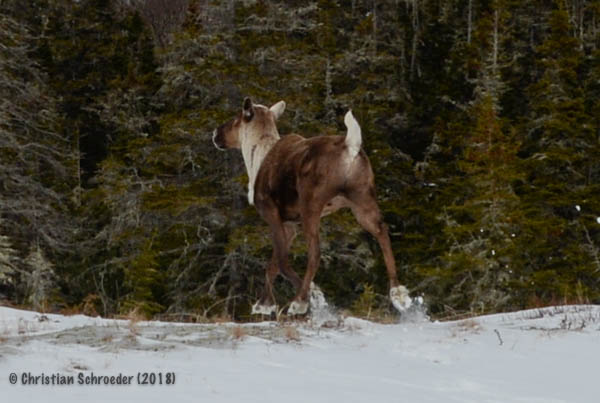 If you look closely, you can see that he appears to be walking on air! Christian captured him with all four hooves in the air.

The whole process from netting to release on Caribou Island was about 35 minutes. This bull, once released, jumped free and ran off about 50 feet, and then slowly walked off. 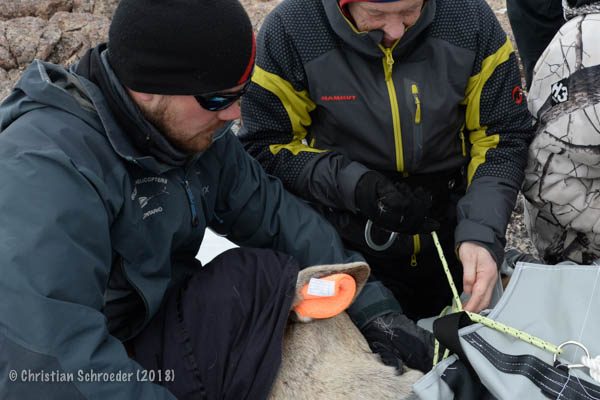 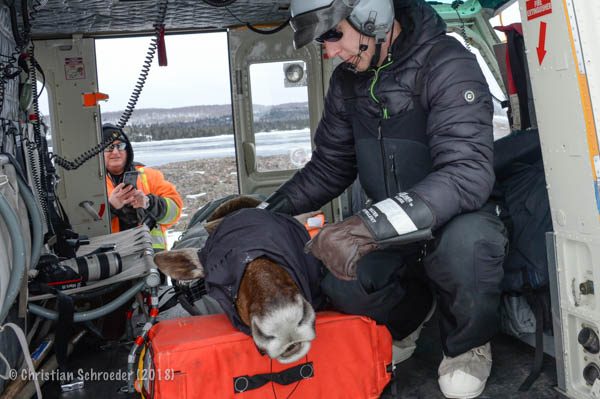 Loaded on the helicopter for transfer. 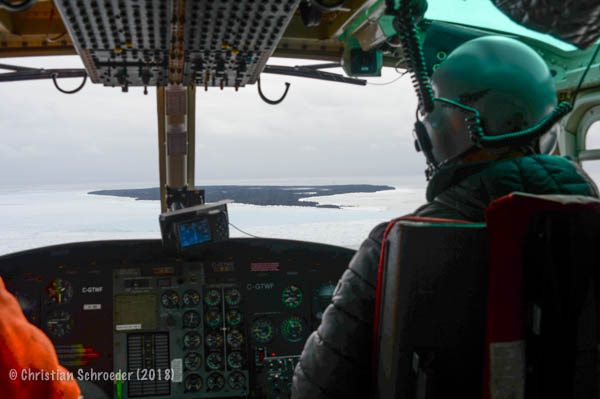 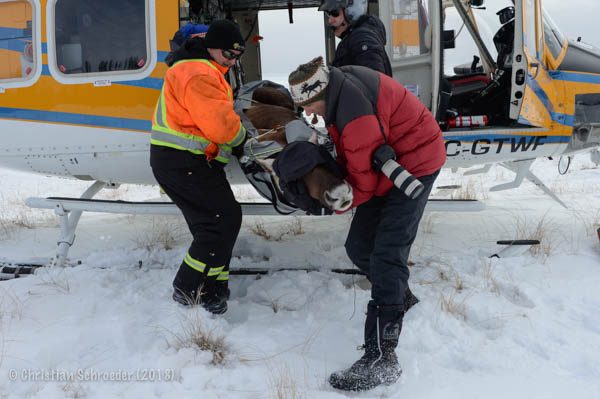 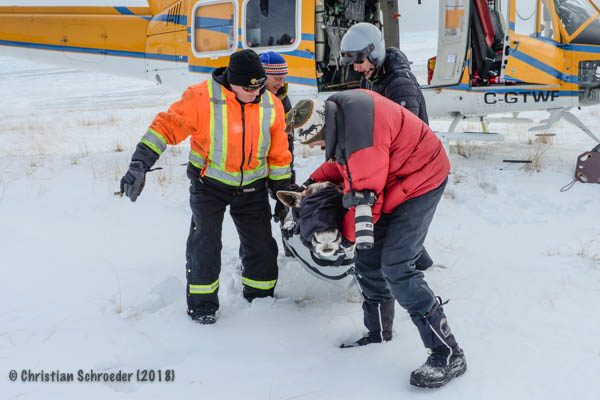 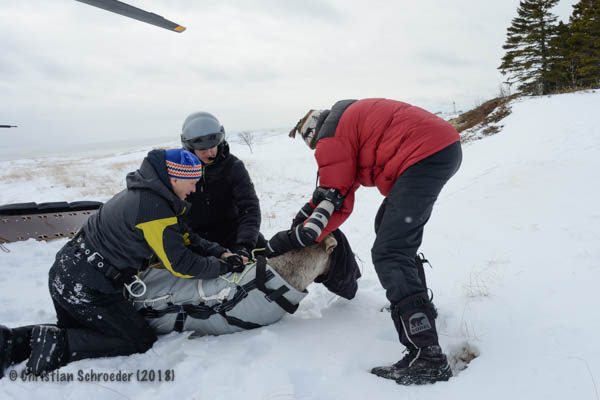 Removing him from the caribou bag, removing hobbles, earplugs and then blindfold. 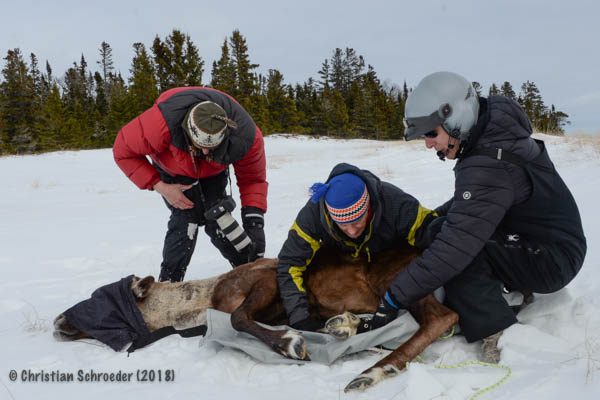 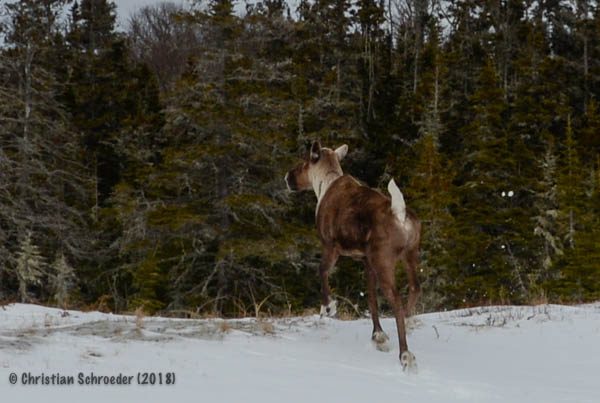 The question was asked of the group, “With the caribou gone off the island, what is going to happen to the wolves? Are they going to die down?” Serge answered, “I personally saw no wolves during the time we were there, which is surprising because three weeks ago, one day I saw four wolves and two caribou during the survey. I think the wolf may have started to die down.” 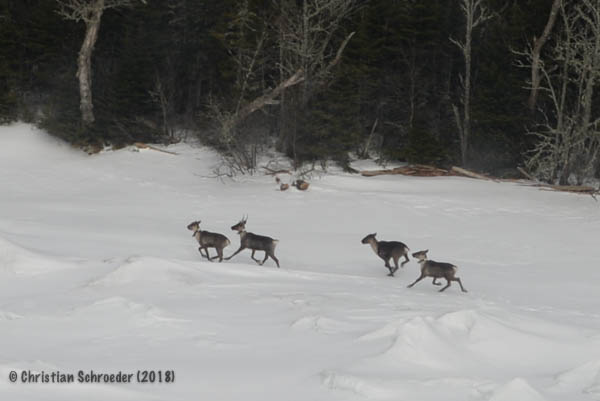 Here are his ‘mates’. The three with collars are females. The fourth is the other bull. 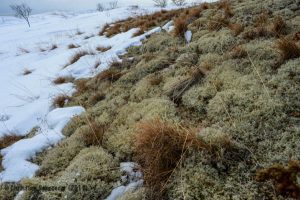 Caribou Island is covered in lichen – just what these caribou love to eat.

Michipicoten First Nation Chief Pat Tangie expressed her concern for the long-term management of this new herd. “From Michipicoten First Nation’s perspective, we as land stewards have a responsibility to make sure our relatives in creation are safe. I just wanted to say how grateful to our young people who are here because we really need you to be eyes and ears on the ground for what’s going on. On the Lake, and on our land base. I really encourage you to get involved in resource management, biology, land management.”

The group thanked Chief Pat Tangie for MFN’s help, “It’s only that pressure that pushed them (MNRF) to do something.” This new herd will grow slowly, but with the absence of predators – they have a better chance at survival then they had a week ago.