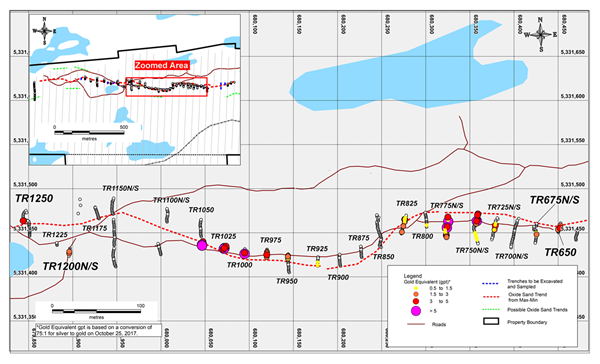 MacDonald Mines Exploration Ltd. announces that it has completed its Trenching and Sonic Drilling Programs that were designed to assess the extend of the Oxide Sands trend at its Holdsworth Gold Project.

Quentin Yarie, President and Chief Executive Officer of MacDonald Mines stated, “Our Trenching Program has demonstrated the extensive length of the Oxide Sands which remain open along strike. The program also enabled us to identify key visual and chemical attributes of the precious metal-rich units in the soil formation.We expect pending assay results from the remaining trenches and drill holes to corroborate the visual cues from the material sampled.”

The Company is currently awaiting results on 228 trench samples.

Completion of Sonic Drilling Program
The 2,000 metres sonic drilling program at the Wawa-Holdsworth Project announced on September 20, 2017 has been completed. The program was undertaken to assess the vertical distribution of the precious metals within the Oxide Sands. Assays are pending for all 401 holes drilled. 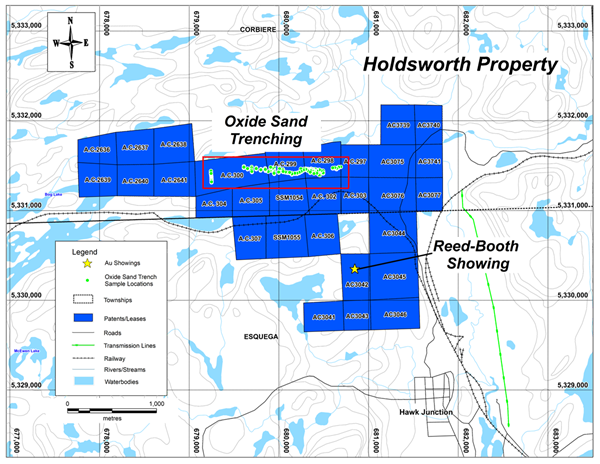 *Grab samples are selective and may not represent the true mineralization of the prospect.

The Company has mobilized an excavator and is conducting a trenching and channel sampling program in the area to sample and assess the potential of the Showing and the associated historical Reed Booth Mine.

Plans for Holdsworth Gold Project
The Company intends to have an inferred resource calculated on the Oxide Sands once all of the assay results have been received.  In addition to the Oxide Sands, MacDonald Mines will also continue investigating the lode gold potential on the property.  The current channel sampling of the Reed Booth Showing will be used to identify diamond drill targets.  These targets will be drilled this winter.

The Company is currently sufficiently financed to complete these activities.

MacDonald Mines is focusing its near-term exploration program on the Oxide Sands. These appear to extend for more than 2 km on the property as corroborated by MacDonald’s airborne magnetics results (see June 1, 2017 News Release) and reach a depth of at least 8 metres.

The soft and relatively unconsolidated Oxide Sands material can be extracted like an aggregate. The Company is working to better define the Oxide Sands in preparation for their potential extraction.

MacDonald Mines Exploration Ltd. is a mineral exploration company headquartered in Toronto, Ontario focused on gold exploration in Canada.  The Company has built a portfolio of safe-jurisdiction, infrastructure-rich projects that demonstrate the greatest market potential for return. The Company is aggressively advancing its highly prospective Wawa-Holdsworth Gold Project.

The Company’s common shares trade on the TSX Venture Exchange under the symbol “BMK”.