MacDonald Mines Exploration Ltd. announces that it has completed a surface Max-Min EM survey on its Wawa-Holdsworth Project. The survey was conducted to map the extent of the gold-bearing Oxide Sands. The Company has begun exposing the Oxide Sands for sampling at different locations along strike identified by the EM survey.

Quentin Yarie, MacDonald’s President and CEO commented: “The EM survey confirms that the Oxide Sands extend at least 1.8 km along strike and supports the historic estimate that the Sands could reach depths beyond 8 metres. We have initiated an expanded trenching program to expose and sample the Sands along strike and we will mobilize a sonic drill in the next 4-6 weeks to begin testing their depth limits.” 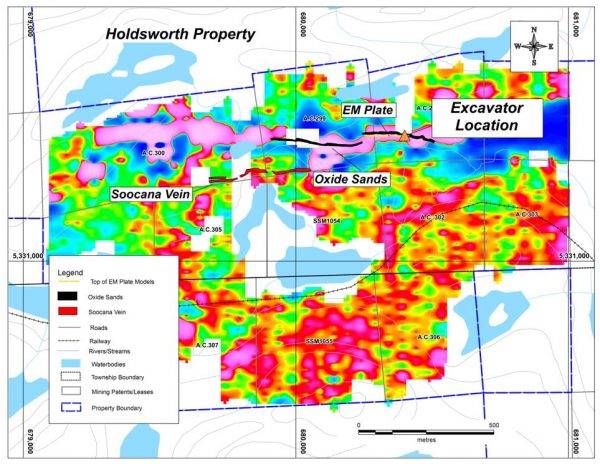 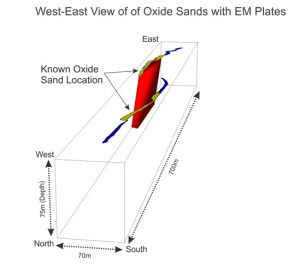 Figure 1 presents the Max-Min data collected to date as a colour image, where red to white colours represent conductors approximately 1.8 km in length that are associated with the historic sampling locations of the oxide sands. 3D Modelling of the EM data over the known auriferous sands implies that the auriferous sands could extend well beyond their known depth of >8 metres (Figure 2).

Exploration will now focus on confirming the surface and depth distribution of the gold-bearing sands along the 1.8 km trend highlighted by the Max-Min EM survey.

*Drilling intersections presented as core length. As they represent early exploration targets, no true width can be estimated for the Holdsworth Pyrite zones and additional drilling is required to estimate the true width of the mineralized zones. 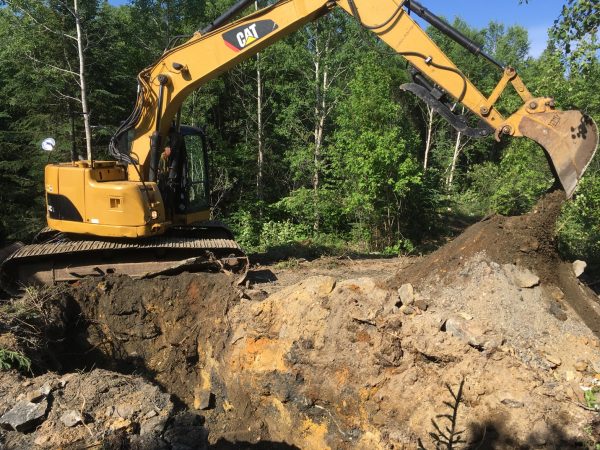 The Company has begun the process of sampling and exposing the Oxide Sands with an excavator (see Image 1 above). Surface sampling of the sands will continue over the next few months. In the next 4-6 weeks, a sonic drill will be mobilized to begin testing the depth limits and vertical distribution of the gold/silver and platinum group elements within the sand column. The following are the Company’s latest assay results from the oxide sands (June 29, 2017 News Release):

** The reader is cautioned that grab samples are selected samples and may not be representative of the mineralization hosted on the property.

About the Holdsworth and Soocana Claims

MacDonald Mines is focusing its near-term exploration program on the Oxide Sands. These appear to extend for more than 2 kilometres on the property as corroborated by MacDonald’s recent airborne magnetics results (see June 1, 2017 News Release) and reach a depth of at least 8 metres.

Recent sampling of the Oxide Sands by MacDonald Mines at location BE returned an average grade of 5.45 g/t gold obtained by averaging the two individual grab samples of Oxide Sands taken at that location (see May 16, 2017 News Release and Table 2). Preliminary metallurgical testing conducted by previous operators on composite samples recovered, without crushing, between 69% and 98.7 % gold. Earlier this year, MacDonald Mines initiated in depth metallurgical testing of the Oxide Sands to achieve the highest possible gold and silver recovery. Results are expected this Fall.

The soft and relatively unconsolidated Oxide Sands material can be extracted like an aggregate. The Company is working to better define the Oxide Sands as continues to prepare for their potential extraction.