On April 13, 2017 at approximately 4:40 am members of the Superior East Wawa Detachment of the Ontario Provincial Police (OPP), Emergency Medical Services (EMS) and Wawa Volunteer Fire Department were called to the scene of a single motor vehicle collision that occurred on Highway 17, seven kilometers south of Highway 519 (Dubreuilville turnoff).

The deceased male passenger in the collision was identified as Johnny Marcello MICHELUCCI (35) of Rayside-Balfour Ontario. The 26 year old male driver was transported to hospital with non life-threatening injuries. 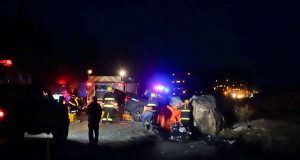