SSMPS – Have you seen Brian? – Located

Brian McPhee has been located and is no longer considered missing. 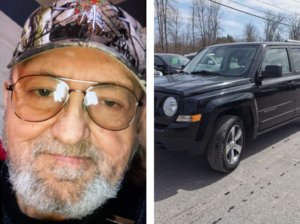 He was last seen on July 18, 2021 around 1:00 a.m. in the 800 block of Second Line West in a black 2017 Jeep Patriot, similar to the picture attached. He is an avid fisherman and is known to frequent the downtown boardwalk area as well as areas north and east of Sault Ste. Marie.

He is described as approximately 6’0″ tall with a salt and pepper beard and he wears glasses.