Ontario has responded to a second request for assistance by the province of Manitoba. There are currently 40 FireRangers and two overhead staff assisting Manitoba with its escalated fire situation.

There was one new wildland fire confirmed in the Northeast region by late afternoon, with 3 other active fires (either held or under control.

The fire hazard is mostly low to moderate in areas located north of Cochrane into the Far North, as well as along the North Shore of Lake Huron. In the rest of the Northeast Region, the fire hazard varies from moderate to extreme, with areas south of Rolphton and east of Peterborough, including parts of Algonquin Park presenting an extreme hazard this afternoon.

There were no new fires confirmed in the northwest region by the late afternoon of June 13, with 31 active fires in the region: seven fires (not under control), 12 (being observed), three fires (held), and nine fires (under control. The wildland fire hazard is mainly low to moderate with areas of high hazard in the districts of Fort Frances, Thunder Bay, and Nipigon. 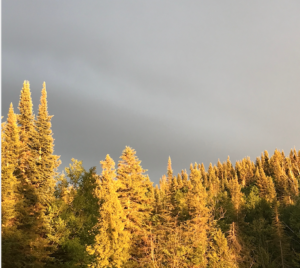 Congratulations to Former Algoma District School Board Director of Education Mario Turco. Turco was installed as the university’s second chancellor during Algoma’s spring convocation which was broadcast online Saturday, June 12, 2021. At the same ceremony, former NDP MPP and former chair of the Algoma U’s Board of Governors, Bud Wildman, received an honorary doctor of letters. More than 400 students received their degrees and certificates at this year’s ceremony.

On June 12th, there were 198 COVID variant cases in Kashechewan with 125 children. Charlie Angus explains brutally and in words anyone could understand, “When babies get sick mom’s get sick. And when mom’s get sick everything falls apart. When you have two and three families living in a single small house things spiral very quickly.” He spent his weekend on the phone raising funds for emergency supplies into Kashechewan and Fort Albany. Mennonite Central Committee (MCC) is coordinating this. He explained, “I am thrilled that we have Heather Cranney and the Red Cross team on the ground.

The Feds may have dropped the ball but Canadians are stepping up.” Donations can be made here (link).

NDP Leader Jagmeet Singh and the NDP’s Critic for Indigenous Youth, Charlie Angus, will speak to media today about their calls on Justin Trudeau’s Liberal government to end their legal battles against Indigenous children. This comes as the Liberal government will be back in court today to continue fighting Indigenous kids in court.

Lisa MacLeod, Minister of Heritage, Sport, Tourism and Culture Industries, to make an announcement about a safe return-to-play framework at 9:30 a.m.