Peacefully on March 21, 2021, Elsie Beatrice Scott left her family and is now reunited with her loving husband James Harding Scott.

Born on December 29, 1934 in Economy, Nova Scotia – she moved with her family to Wawa, Ontario at the age of 2 and never left. First living at the Minto Mine before moving to Caverhill Street in Wawa.

At the age of 17 years, Elsie lost her mother to cancer and took on the role of mother to her four younger siblings – helping to raise them.

Elsie lost her only love in 1979. She never really recovered emotionally from that loss.

In 2011, Elsie suffered from a kidney infection followed by a fractured hip that nearly took her from us. At this point, she entered long term care at the Lady Dunn Health Centre and was nursed back to health both physically and emotionally by a wonderful staff of caring professionals.

Elsie truly thrived in long term care and enjoyed her years with her hospital family. She had a special relationship with nearly every one of them. She interacted with the nursing, cooking, cleaning staff – she genuinely cared for everybody. Mom loved to give Matt balls any time he tried to get her to exercise, she enjoyed Matt, it was the exercise she disliked.

She prayed daily and if you were in her life, you were definitely included in her prayers. She loved unconditionally and always let you know you were most important.

The family would like to thank the caring and devoted nursing staff of the Long Term Care Unit at Lady Dunn Health Centre and Dr. Robinson for the care, compassion and support shown to her family as family members prepared for her final voyage.

At the request of Elsie, no service will take place. Spring interment will take place at a later date with close family. Memorial donations can be made to the Long-Term Care Unit at Lady Dunn Health Centre. 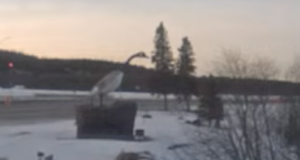