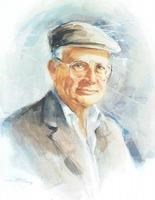 John E. Cook, Sr., born on March 3, 1919 in Oshkosh, Wisconsin to Everett J. Cook and Frankie A. (Broom) Cook. He passed away on November 15, 2020 at Aspen Grove Assisted Living in Lambertville, MI. John had lived on Densmore Dr. in Toledo, OH for 60 years. He was a veteran of the U.S. Navy during WWII. John had been the chief development engineer for Libby Glass and retired in 1981.

John was very active in the Toledo Artists Club where as a well-known Toledo Water Color Artist, he taught watercolor classes for about 20 years. He had a long amazing life!

There will be no visitation or services per John’s request. He will be interred next to his wife Susie at Ottawa Hills Memorial Park. Newcomer Funeral Home – West Sylvania Chapel, Toledo (419-392-9500) assisted the family with professional services.

Those wishing to make memorial contributions are asked to consider a charity of their choice.