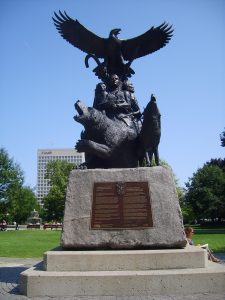 The National Aboriginal Veterans Monument is located in Confederation Park which is located on the East side Elgin Street across from the Lord Elgin Hotel between Laurier Avenue West and Slater Street in Ottawa, Ontario.

“Today, we mark the important contributions made by First Nations, Inuit and Métis Veterans in service to Canada. Our country is indebted to them for their sacrifices, and for the impacts their service has had on their families and communities.

“This year, as we mark the 75th anniversary of the end of the Second World War, we also honour the more than 3,000 Indigenous persons – like Willard Bolduc of the Ojibwa Nation in Ontario – who served across every theatre of that conflict.

“Flying Officer Bolduc was a gunner in the Bomber Command of the Royal Air Force’s No. 15 Squadron, flying mission after mission over occupied Europe, for which he was awarded the Distinguished Flying Cross in 1944.

“We also recognize the service of modern-day Veterans, like Debbie Eisan from the Batchewana First Nation, and Sarah Leo, an Inuk woman. Chief Petty Officer 2nd Class (retired) Eisan served 36 years with the Royal Canadian Navy, and became an Indigenous advisor to senior military leaders.With 21 years of service as a mobile support equipment operator, Sarah Leo deployed to the former Yugoslavia and the Balkans. In 2019 she was appointed Honorary Colonel of 444 Combat Support Squadron, located at 5 Wing Goose Bay, Newfoundland and Labrador, and had served as president of the Nunatsiavut Government, the self-governing Inuit land claims organization in Nunatsiavut, working to create a greater sense of community and understanding in northern Labrador.

“Finally, we pay tribute to the more than 2,700 Indigenous members currently serving in the Canadian Armed Forces. Here in Canada and on operations around the world, they continue to uphold the proud legacy of service left behind by generations past.

“Despite the significant impacts the COVID-19 pandemic has had on all of our lives, we hope that you’ll take a moment today to commemorate the sacrifice of Indigenous Veterans, and to preserve the memory of those who wore the uniform and gave their lives in service of Canada. 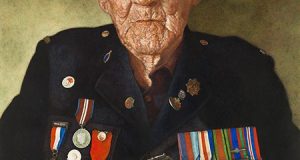 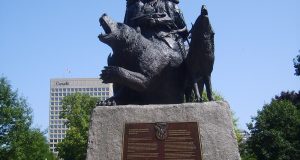