Algoma Public Health is in the process of transitioning to a new provincial public health case and contact management system for COVID-19 tracking and reporting. APH will now be reporting testing numbers from Monday to Friday only. Pending numbers will no longer be reported, however, we will still report any positive cases daily.

There are fourteen fires active across the Northeast Region, all of which are being observed. The fire hazard is low to moderate with a few areas in the region that are holding onto a high fire hazard today, mainly in communities around Wawa, Dubreuilville, Chapleau and along the north shore of lake Huron, including St-Joseph’s Island and Cockburn Island.

There were 19 active fires in the Northwest Region. One fire is not under control, one fire is being held, five fires are under control and 12 fires are being observed. The forest fire hazard primarily moderate to low across the region with the exception of pockets of high fire hazard in the Fort Frances and Nipigon sectors.

Nipigon 45 – 6,678 hectares is not under control. More crews continue to arrive on the fire bringing the new total to 27 crews –  including local sustained action crews from Eabametoong. Firefighters will continue suppression activities focused on consolidating hose lines, and establishing line camps and helipads. 7 helicopters are supporting the ground effort today and bucketing water as needed.

Red Lake 49 – 552 hectares – 100% contained and under control. Due to the success of fire fighting operations, crews, personnel and equipment are being demobilized on Red 49 over the next few days. 15 crews are finding and extinguishing remaining hotspots in the interior of the fire, with 4 helicopters are supporting crews on the fire line. 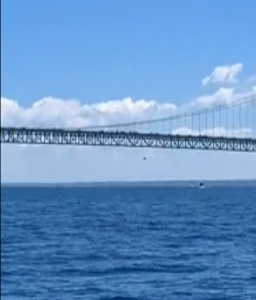 For a pilot it would be a stunt one would only dream about – flying under the Mackinac Bridge. A small aircraft flew under the bridge at approximately 2:50 p.m. on Sunday, June 28. The U.S. Coast Guard Investigative Services (CGIS) and the Michigan State Police are searching for the pilot. A Coast Guard crew member on a vessel in the Straits caught the stunt on video.

This pilot is the second to have completed this dangerous stunt.

In 1959, Air Force Capt. John S. Lappo flew a Boeing B-47 jet underneath the Mackinac Bridge. The Muskegeon born pilot lost his wings in a general court-martial, but remained in the military, retiring in 1972. He passed away from Parkinson’s disease on Nov. 15, 2003 at the age of 83.

On September 10, 1978, flying in heavy fog, a small private plane carrying three US Marine Corps Reserve officers Maj. Virgil Osborne, Capt. James Robbins, and Capt. Wayne W. Wisbrock smashed into one of the bridge’s suspension cables, tearing the wings off the plane, which then plunged into the Straits of Mackinac. All three men were killed.

There is only 155 feet between the bottom of the bridge deck and the water. A pilot must thread his aircraft between the water and deck.

Lisa MacLeod, Minister of Heritage, Sport, Tourism and Culture Industries, will be joined by Ross Romano, Minister of College and Universities and MPP for Sault St. Marie, for an announcement in support of Northern Ontario’s tourism sector today at 10:15 a.m.

Premier Doug Ford will be joined by Solicitor General Sylvia Jones, Thomas Carrique, Commissioner of the Ontario Provincial Police, and Jill Dunlop, MPP for Simcoe North, to make an announcement at 1 p.m.