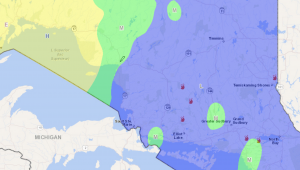 One new forest fire, North Bay 30 was confirmed by late afternoon on July 11, it has already been declared out at 0.1 ha. There are thirteen active fires across the region. Two fires are being held, five are under control and three are being observed. At the time of this update, there are three fires that are not yet under control.

The fire hazard in the region is high in the southwest corner of the region and in Thunder Bay and north shore areas of the Nipigon sector. Hazard conditions are mainly moderate to low in the central and northern parts of the region.

Michigan Gov. Gretchen Whitmer has signed an executive order requiring mask use in the state of Michigan, beginning July 13, 2020 at 12:01 a.m.. Michigan residents must wear face coverings in indoor public spaces, and in crowded outdoor spaces, with businesses required to refuse entry, or service, to persons who don’t wear a face covering beginning Monday. Persons exempt from wearing masks include children less than five years, those who cannot medically tolerate a face covering and anyone eating or drinking when seated at a restaurant. Violators can be fined $500.

As of Friday, July 17, 2020, the public will be required to wear a face covering (i.e. non-medical mask) when entering the indoor premises of businesses, organizations and on public transit systems throughout the service area of Algoma Public Health (APH).

Premier Doug Ford will be joined by Christine Elliott, Deputy Premier and Minister of Health, Rod Phillips, Minister of Finance, and Stephen Lecce, Minister of Education, to make an announcement at 1 p.m.