Doug Ford ripped up the Health and Physical Education curriculum, threatened teachers with a sex-ed snitch-line and spent $1 million on an online survey, only to release a new curriculum Wednesday that is largely unchanged from the 2015 sex-ed curriculum.

The new curriculum is a victory for student safety, and for the families, teachers, education workers and experts who led the fight alongside Andrea Horwath and the NDP — but it also means Ford wasted a year just so he could posture for social conservatives, said NDP Education critic Marit Stiles.

“The health and well-being of our children should be a top priority,” said Stiles. “Instead of prioritizing kids’ safety over the last year, Ford spent a year showing off for social conservatives at the expense of kids. He forced children to go to the human rights tribunal to fight for their rights. He threatened teachers with a snitch line for answering students’ questions honestly. He tried to make students — especially LGBTQ+ students and families — feel less important than his politics. He played politics with children’s safety.”

Legal challenges and broad-based opposition from parents, educators and one of the largest student demonstrations in provincial history helped force the Ford government to back down on its plan to repeal elements of the curriculum including gender identity and consent.

Stiles said the NDP will continue to review the new curriculum in detail in the coming days, but is relieved that concepts it fought to maintain — gender identity and sexual orientation, consent, and cyber bullying, for example — will remain. Now, said Stiles, fighting Ford cuts to mental health supports and school staff including guidance counselors will be front and centre for the NDP.

“Students who learned about their mental health and wellbeing through this curriculum have fewer places to turn for help because of Doug Ford’s cuts, and that’s wrong and has to be addressed,” said Stiles. 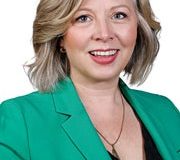