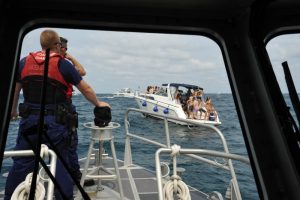 The Coast Guard and Chicago-area partner agencies, including the Illinois Department of Natural Resources and the Chicago Police Marine Unit, cracked down on boat owners and operators conducting illegal charter operations on Lake Michigan in Chicago this summer, resulting in terminations, suspensions and fines.

Coast Guard Station Calumet Harbor, working in close coordination with Coast Guard Investigative Service, conducted 29 boardings on vessels suspected of operating as illegal charters. Twelve vessels were served with captain of the port orders, which terminated the voyages until they complied with federal laws and regulations.

The owner of the Irish Wake, a 31-foot recreational vessel from Prospect Heights, Illinois, was ordered to pay $14,000 for operating as an illegal commercial charter while carrying nine paying passengers. A credentialed mariner from Arlington Heights, Illinois, operating the 37-foot vessel Doctor’s Orders, admitted to operating a commercial charter without a certificate of inspection and was forced to turn over his Merchant Mariner credentials to the Coast Guard.

In an effort to address the above concerns and prevent marine casualties resulting from illegal charter vessel operations, a more aggressive and unified approach – with the goal of preserving life, promoting maritime safety, and facilitating commerce – was implemented in 2017 by Chicago area Coast Guard units, led by Coast Guard Marine Safety Unit Chicago.

“The Coast Guard’s mission over the last two summers with this operation was to ensure safety of life, not only here in Chicago, but across the nation,” said Cmdr. Zeita Merchant, commanding officer of Marine Safety Unit Chicago. “These owners and operators are putting at risk the lives of the people they embark on their privately owned vessels.”

The use of social media sites and ride sharing smartphone applications, have significantly increased the convenience of advertising ride-sharing services by owners and operators of recreational vessels, as well as the ease of hiring recreational boats by the general public.

“The efforts of Chicago Coast Guard units have served as the gold standard across the Great Lakes as well as the Coast Guard, said Capt. Amy Beach, chief of the Coast Guard Ninth District prevention department. “Surge operations using a unified approach and response strategies have been adopted and implemented successfully at other Coast Guard units in Florida, California, Michigan, Wisconsin, and Missouri.”

Passenger vessel operators must adhere to safety regulations set forth by the Coast Guard. Violators are subject to civil penalties and/or a Captain of the Port Order. Failure to comply with the Captain of the Port Order may result in a civil penalty of up to $91,101 for each day of continued operation. A willful and knowing violation of this order constitutes a Class D felony, which may lead to jail time up to 10 years and a fine of up to, and not exceeding, $250,000.00.