An on-duty uniform member from the Superior East Detachment of the Ontario Provincial Police (OPP) has been charged after a collision that occurred at 7:30 p.m. on Friday June 8, 2018 on Highway 17 in the Township of Alanen, District of Algoma.

The officer was travelling in the southbound lane of Highway 17 when he collided with a civilian motor vehicle in the same lane.

The OPP vehicle, a fully marked black and white police cruiser, did not have the emergency lights activated at the time of the collision.

Provincial Constable Garrett ROTH, 27-years-old of Hornepayne, Ontario has been charged with Careless Driving contrary to section 130 of the Highway Traffic Act. The officer has been a member of the OPP for two years and five months. 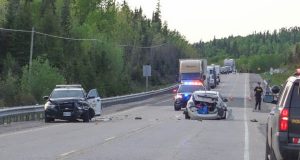