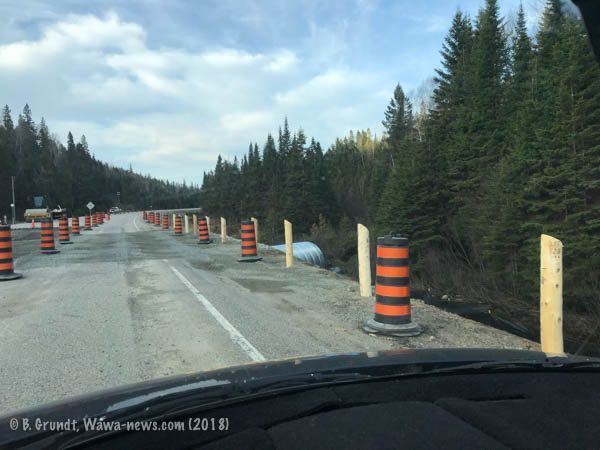 Tuesday morning, May 15th traffic was still flowing one lane at a time through the construction zone where the culvert was being repaired. In the photo above you can see the new guard rails, and the end of the new culvert peeking out from the embankment. When I returned from the Sault later that afternoon, the lanes had been paved, and it seemed as if the removal and replacement of the culvert was complete. From failure to culvert replacement and pavement paved… four days. 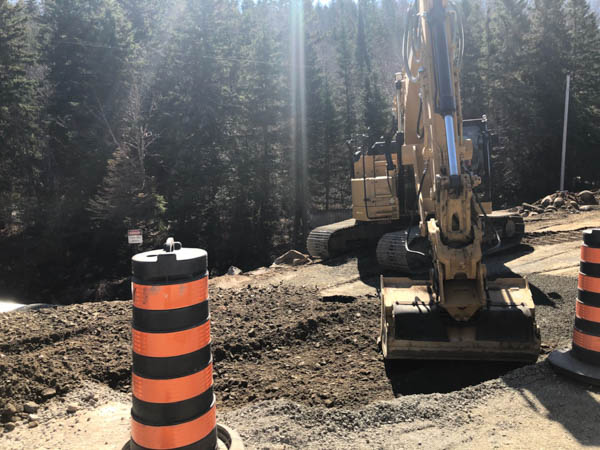 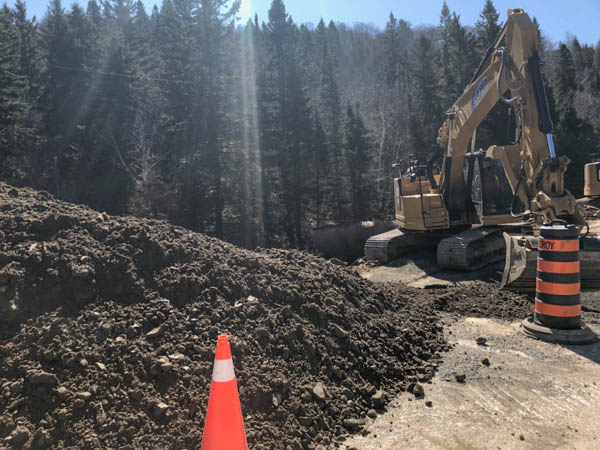 Yesterday traffic was flowing through the area where the culvert was replaced. With the large section of culvert spanning the three lanes, traffic was allowed to go through alternating directions while work continued on placing the culvert on either side (joining the center span and underneath the embankment, and a bit further). Keeping lanes closed also allows for worker safety by providing space for equipment, and worker movement back and forth on the construction site. 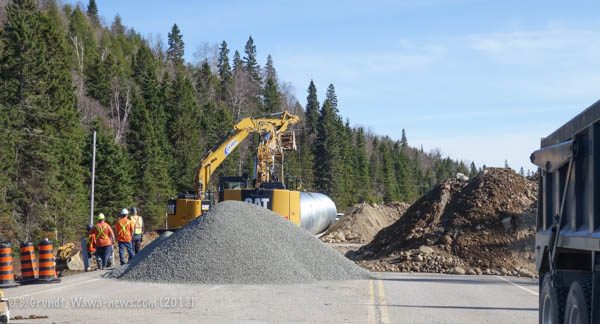 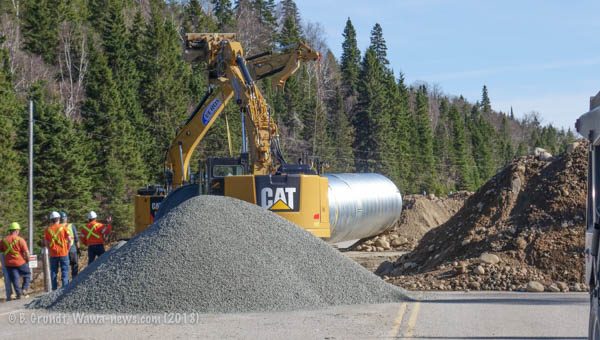 Clearing the piles of dirt/gravel that covered the old culvert. 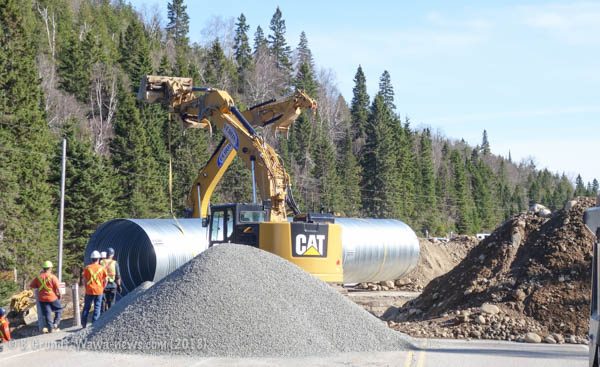 Twisting the culvert into position. 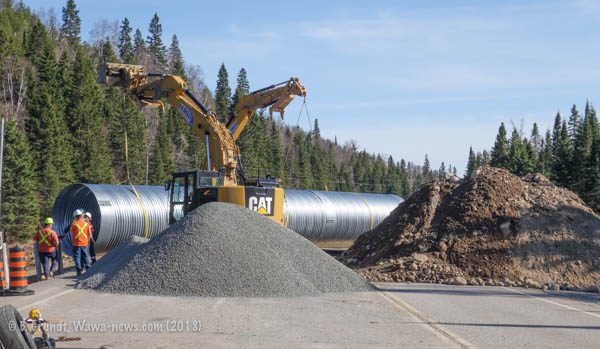 Continuing to position the culvert. 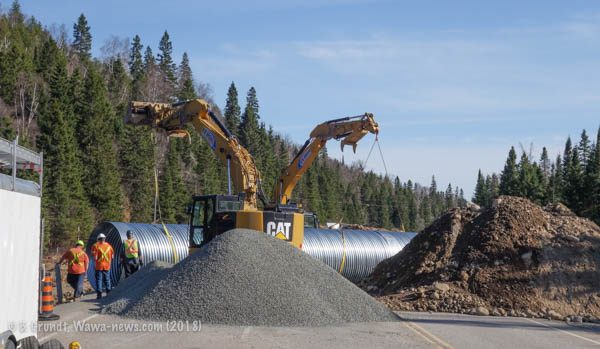 Beginning to lower the culvert into place. 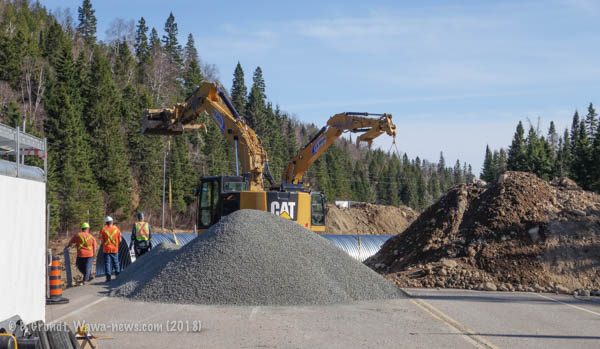 Lower, and lower it goes, ever so gently. 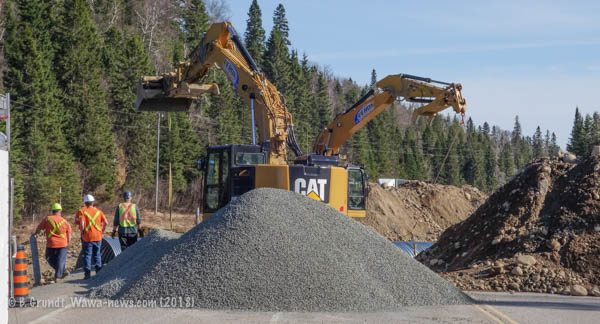 Resting the new culvert on the bed of clean gravel.

At 6 p.m. the culvert was lifted by two excavators working in unison. It was quite exciting to see these two huge machines lift, turn, and place the culvert upon the bed in just the right place. The culvert is made up of a couple of sections, and care had to be made in order to lift it into place.

Now that the culvert has been placed, it will have to be covered with gravel and packed down before the highway can be opened. The plan is to (as long as everything goes according to plan) have one lane open late tonight. But there are no promises, and one shouldn’t count on travelling tonight. Even if the highway opens late tonight, there will be lots of moose wandering around, so you may wish to just consider a good night’s sleep then travelling tomorrow morning.

Wawa-news will continue to update this article.

Broadspectrum and Leroy Construction are working hard to remove the pavement and gravel from the three lanes that cover the collapsed culvert that the Red Rock River flows through. By noon today, one of the two excavators had removed a very large piece of the culvert from the southbound lane. The other was working hard to break the pavement and start digging down to the other part of the culvert (under the two northbound lanes). 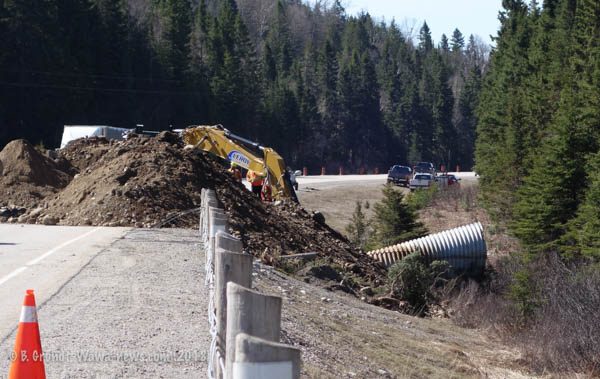 It is not an easy job to replace a culvert. Once the equipment is on site, room has to be made for the excavators and/or other equipment to operate safely. That would include generators and lights for after dark work. Equipment operators have to be brought in as well. Dump truck operators – a whole crew of men. Support logistics, food, water, beverages, and facilities is organized. Once the pavement is removed and taken away, mounds of gravel accumulate in piles on either side of the culvert. When exposed, the culvert has to be removed, and the ‘riverbed’ prepared to accept the new culvert. Culverts are usually replaced in sections. Once one side has a new piece of culvert in, the gravel is placed over it, and a new road surface is packed. In this fashion, one lane may be able to open before the entire culvert replacement is complete. Then traffic may flow, but this now requires flagging crews to ensure the safety of workers and drivers. Work continues on the other side, and finally the work is completed. 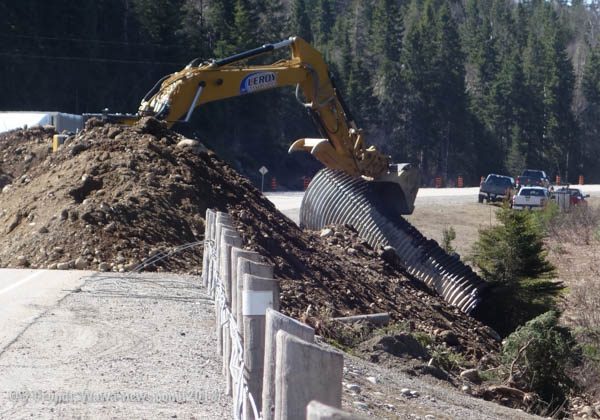 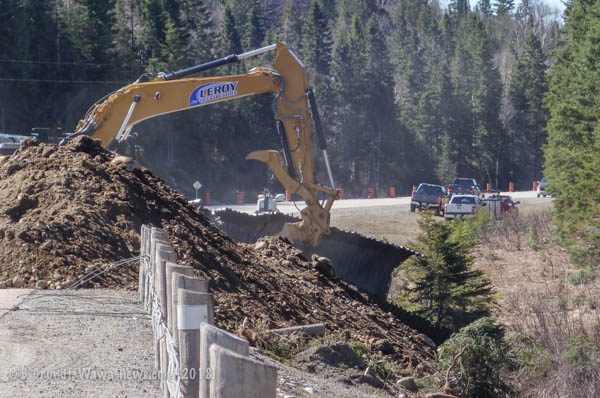 Unfortunately for the travelling public, there is no crystal ball that can tell exactly when the highway will reopen. Having been able to go to the site and take photographs, I can tell they are not wasting any time. There are two excavators working, and several dump trucks taking excess material away. The culvert is on the way from Sault Ste. Marie and the truck towing the one lane closed sign was at Old Woman headed to the site when I headed home at noon.

Keep in mind that work is still continuing south of Temagami “Update: #Temagami #HWY11 remains reduced to single lane 5kms S of Temagami due to repairs to culvert causing sinkhole.” – 8:30 this morning. That sinkhole closed the highway May 5th, was opened and is now at one lane to complete the repairs.

Travellers can detour around the closure by taking (westbound) Wawa towards Chapleau via 101; Junction of 101/129, taking 129 towards Thessalon (Junction of 129/17). At the junction one can decide to go 17 to Sudbury, or 17 to Sault Ste. Marie.

Wawa-news will continue to update as information becomes available.

Highway 17 remains closed at this time. There has no other information available. 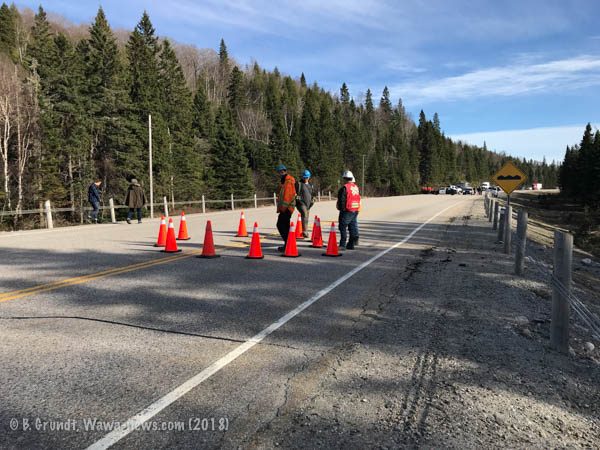 Broadspectrum employees placing a circle of cones around the area of subsidence.

The highway is closed from Wawa to Batchawana Bay. 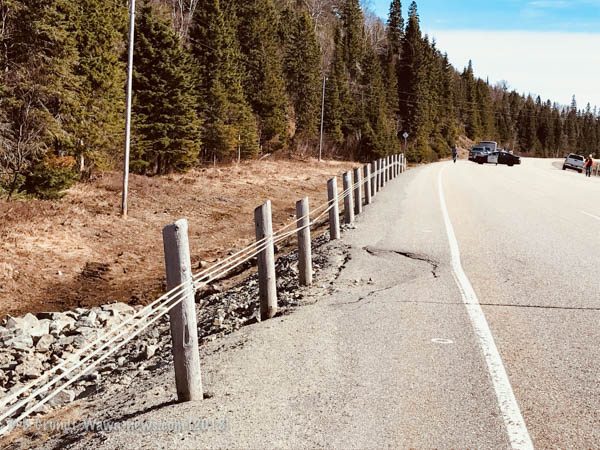 Looking south – East shoulder showing the embankment has slid/sunk and there are cracks in the pavement where the culvert is collapsing; the guardrails are sinking as well.

There was no estimation of when the highway is expected to re-open. There is talk of possibly being able to open one lane, but there is nothing official. SE OPP have a manned barricade up at Pinewood Drive advising that the highway is closed, and a second barricade at Kinniwabi Pines Restaurant. 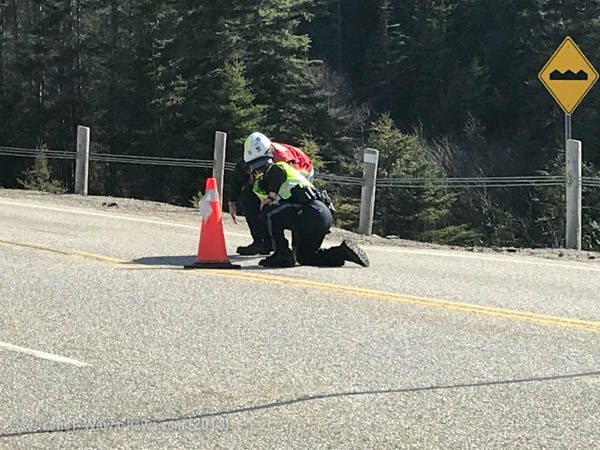 An SE OPP officer inspecting the extent of the ‘sinkhole’. If you look closely you can see the dip in the highway from the sinking guardrail to the hole and through the yellow line.

There has not been a press release from the OPP advising that the highway is closed. 511ONNortheastern has tweeted “#Wawa #Hwy17 EB at #Hwy101 E, lane blocked due to repairs to culvert causing sinkhole. #ONHwys”.

Wawa-news left the scene at 6:30 and people were starting to turn back to Wawa or Sault Ste. Marie. Eastbound travellers can take 101 to 129 and then to Thessalon to rejoin Highway 17; or reverse that for westbound. There were not any repairs underway at that time.

Culvert being washed out