Red Pine has announced results from 20 diamond drill holes from the 2017-2018 drill program. As a result of this drill program, a new discovery almost 1 kilometer north of the Surluga Deposit, indicates the potential to expand their gold resources. Results also indicate that gold mineralization in the footwall of the Surluga Deposit now extends over a strike length of more than 2.2 kilometers. 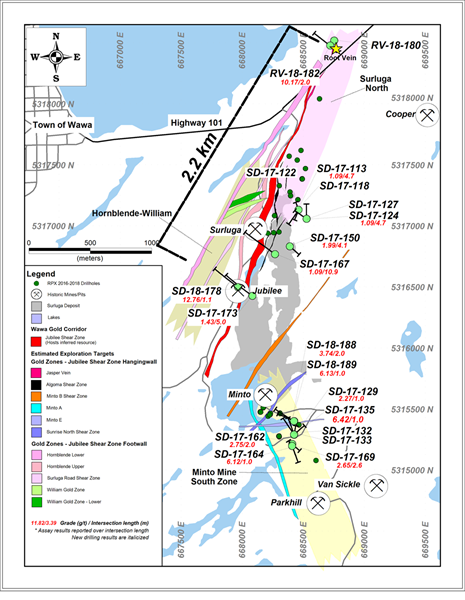 Quentin Yarie, President and Chief Executive Officer of Red Pine states, “Our drilling continues to expand the mineralized footprint of the Wawa Gold Project. We have discovered broad zones of mineralization between the Jubilee Shear Zone, the host of the Surluga Deposit, and the Hornblende Shear (sub-parallel to the Jubilee Shear). We will further investigate these new lenses of high-grade gold in our on-going drilling program as we continue to work towards advancing the existing resource on the project.”

Table 1. Highlights of the 2017-2018 drilling results in the Wawa Gold Corridor

Red Pine’s exploration work includes the ongoing sampling of 42,000 metres of historic core that was never sampled by previous operators of the project, and aggressive drilling campaigns of over 45,000 metres of drilling.  Red Pine has made four discoveries along the extension of the Surluga Deposit: the Surluga North Zone; the Hornblende-William Zone; the Minto Mine South Zone and; the Grace-Darwin Zone. These are part of the Wawa Gold Corridor, a gold-mineralization zone that extends for more than 5 kilometres.

Red Pine’s on-going drill program is designed to potentially expand the size of the existing inferred gold resource and connect the other zones of gold mineralization along the newly-discovered Wawa Gold Corridor. The current program is targeting both the Surluga North discovery and the Minto Mine South Zone discovery.