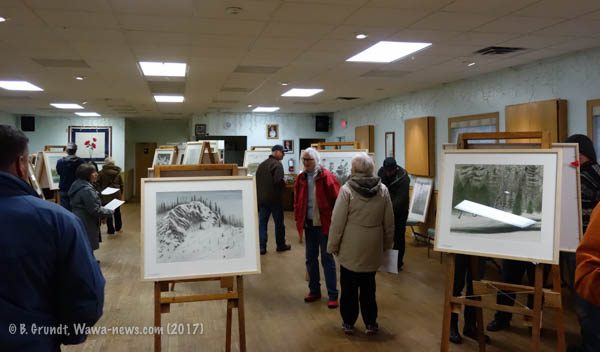 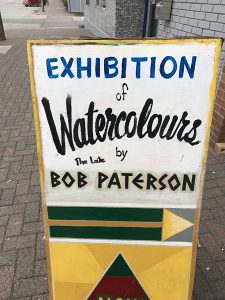 Just as the glorious colours of fall begin their transition into the blues and silvery whites of winter, Wawa residents were treated to what was also a sign of that transition – Bob Paterson’s annual Exhibition of Watercolors. He’s been gone now nearly four and a half years, but I swear sometimes out of the corner of my eye, I see his SUV parked by the side of the road, and Bob painting some vista at his easel, that we will see in a show sometime…

As the saying goes, all good things must come to an end, and Marion says this is the last show of Bob’s work. On Bob’s easels, she hung a great variety of watercolours, spanning several years, and many miles. There were images of Wawa Lake, Old Woman Bay, Lac de Zajac, Lake Superior Park, and many others, 32 in total. 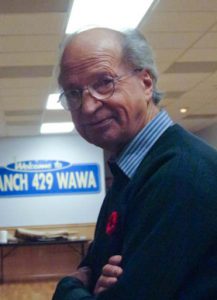 It was a treat to walk amongst the easels, sharing stories of Bob painting, and the vision that he had. Bob had been a resident of Hawk Junction since 1984, and left his mark in many ways – and not just in his watercolours. He taught art to children, and adults; published several books, featured pencil sketches in the Algoma News Review…

In the other tradition we all treasured, Marion had sweet treats for everyone to enjoy as they tried to pick their favourite. It didn’t take long, and the red dots began to appear; signifying that that particular vista had been admired, chosen and sold. As always, purchasers were asked to keep their image on display until the end of the show – keeping the show intact so that even the latecomers could enjoy the show in its entirety.

At the end of the show, purchasers wrapped their precious vistas in a not so glamorous garbage bag and took them to their new homes. It always seemed rather wrong to cloak them in garbage bags, as they are so beautiful – but how practical to allow for reuse of the wrapper!

If you missed the show, you can always contact Marion at her home in Hawk Junction, as there were a couple of watercolours that hadn’t been sold. 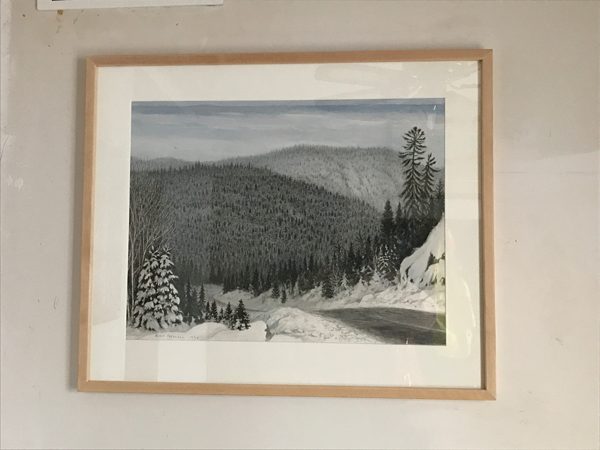 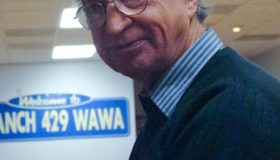 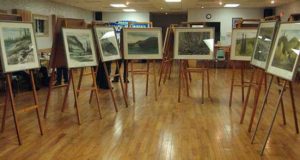