Red Pine Exploration Inc. has received the final assay results for holes DG-17-53 to DG-17-66 that were drilled 3 km south of the Surluga Deposit in the Darwin-Grace Mine area as part of the 6,000m winter drilling program. 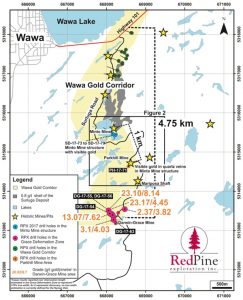 Overview of the Darwin-Grace Mine results

The Darwin-Grace Mine area is located 3 km south of the Surluga Deposit Inferred Resource1 at the southern extent of the Wawa Gold Corridor. These preliminary drilling results indicate that the high-grade gold mineralization in the former Darwin-Grace Mine extends near-surface beyond what was previously known.

Table 1. Highlights of the winter 2017 drilling results in the Darwin-Grace Mine area

*Assay results reported over intersection length estimated in the Darwin-Grace Deformation to represent >80% true width; as it represents a recent discovery, no true width estimation is currently defined for the intersection in the Nyman Vein.

The Wawa Gold property package consists of over 5,000 hectares and hosts several former mines with a combined historic production of 120,000 oz gold. To date, the largest gold deposit on the property is the Surluga deposit, which hosts a NI 43-101 Inferred Resource of 1,088,000 oz gold at an average grade of 1.71 g/t using a 0.5 g/t cut-off contained within 19.82 million tonnes2.