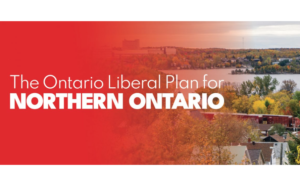 The Ontario Liberal Northern Platform will deliver on long-standing demands from Northern Mayors for an immigration plan that attracts New Canadians to cities and regions across Northern Ontario and ensure skilled labour matches the jobs needed to build and grow the Northern economy.

“This week’s announcement of the Northern platform was a proud moment for me. Our Northern caucus of candidates worked hard to inform this platform, and consulted with many stakeholders to bring forward this plan. As a hospital administrator, I am often presented with policies developed in Toronto, that just won’t work for our situation here,” said Tim Vine, Ontario Liberal candidate for Algoma-Manitoulin, “We can and have, come up with a Northern platform that supports and finds solutions unique to our Northern context.”

The Ontario Liberal plan for Northern Ontario focuses on building homes, schools, and hospitals. Our workforce is in desperate need of the specific skills to get this job done. Immigration is currently a federal issue, but it’s time Ontario take over its own immigration and gain control over who we welcome to the province, just like Québec. To implement this task, an Ontario Liberal government will appoint a dedicated Minister of Immigration.

“For Ontario to be a Place to Grow, the provincial government needs to have a say in ensuring the nurses, the engineers, and the heavy equipment operators we need and who want to come to Canada are allowed to live in Northern Ontario. That is how we get the Ring of Fire built, get nurses who will provide care in both French and English in the North, and keep our populations growing,” said Tim Vine.

In the 2018 Northern Leaders’ Debate, Doug Ford shut down the request of Northern mayors to attract more skilled immigrants, instead saying he would be “taking care of our own first,” slamming the door to improvements to our immigration system that would benefit the North. Fortunately, the federal government came through with a time-limited pilot program for the North, but Ontario Liberals know we need a long-term approach. We will strike a Northern Ontario Immigration Advisory Panel, composed of Northern municipal leaders and economic development officers, to ensure this new system is established in the best interests of the North.

The Ontario Liberal comprehensive plan will also make Northern Ontario a place to grow by:

Northern Ontarians will benefit from the bold vision outlined in ‘A Place to Grow,’ including: