On December 27, 2021, at approximately 11:07 p.m., members of the Superior East Detachment of the Ontario Provincial Police (OPP) responded to a domestic dispute on Mackey Street in Wawa.

Upon officer’s arrival, the victim had left the scene and the suspect was barricaded inside the residence. Members of the OPP’s Emergency Response Team (ERT) and Canine Unit attended the area to assist in peacefully resolving the situation. A Remotely Piloted Aerial System drone was also used to communicate with the barricaded person.

On December 28, 2021, at approximately 9:00 p.m., the suspect voluntarily exited the residence and surrendered to police without incident.

As a result of the investigation, a 35-year-old person was charged with the following:

The accused was remanded into custody pending a bail hearing. 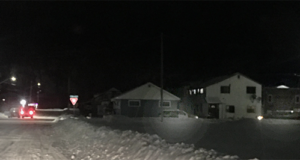