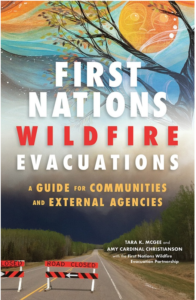 It is wildfire season, and First Nations are taking preparedness into their own hands. Their experiential knowledge of wildfires and the land they live on has provided indispensable input into the first book to set out a step-by-step guide on wildfire evacuation planning:

“This work highlights the fact that Indigenous people, in learning from the environments they have lived in and cared for since time immemorial, have embraced the First Nations idea that adaptation equals resilience equals sustainability.”

The devastation of the 2011 wildfires, when 4,216 fires swept across Canada and consumed 2.6 million hectares of forest, severely affected thousands of First Nations residents. Thirty-five communities were forced to evacuate their lands, some with great difficulty. And this prompted Tara McGee, professor in the Department of Earth and Atmospheric Sciences at the University of Alberta, and Amy Cardinal Christianson, a Métis research scientist with the Canadian Forest Service, to investigate wildfire evacuation planning for First Nations.

This investigation led to the formation of the First Nations Wildfire Evacuation Partnership. They identified seven communities that had been evacuated between 2011 and 2015, and then reached out to the Nations’ leaders, inviting their community to share their evacuation experiences. Wanting to make a difference, they also involved government and nongovernmental agencies: the Assembly of First Nations; Indigenous Services Canada; emergency management agencies; and environment, health, and natural resources ministries from the provinces affected by wildfires.

The authors also performed over 200 interviews with evacuees to gain an understanding of evacuation experiences, including the challenges they went through, such as: exiting remote locations, some of which are fly-in-only; larger households not having access to enough vehicles; accessing fuel in an emergency; lack of financial resources; the stress of being forced to leave the community; and lack of clear communication with external agencies. They also found that support from family and other members of evacuees’ own community was the most important support for evacuees. In addition, aid from people living in host communities was also helpful.

The increasing threat of wildfires because of climate change presents a different set of variables and has necessitated that the Nations prepare for wildfire evacuation planning. Equally important, external agencies, organizations involved in wildfire evacuations, and host communities should understand the needs of First Nations in order for an evacuation to be safe, respectful, and successful. First Nations Wildfire Evacuations: A Guide for Communities and External Agencies is a critical step-by-step guide for all parties affected.

The book can be purchased at this link.