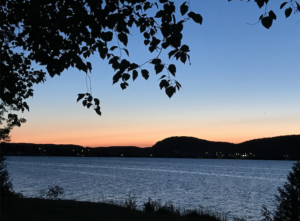 There were no new wildland fires confirmed in the Northeast region by late afternoon, with six (active), one (held), four (under control) and one (being observed).

The fire hazard ranges mostly from low to moderate, except for a few small areas of the region which are maintaining a high hazard this afternoon: they are located north of Lake Nipissing and northeastward to Temagami; in Cartier and surrounding areas; south of Morin Village and east of Westree; in Chapleau and its surrounding areas; west of Dubreuilville along highway 519; and in Pukaskwa National Park extending northward along a portion of Highway 17.

The wildland forest fire hazard in the northwest region is predominantly high in all sectors with areas of extreme hazard in Red Lake, Sioux Lookout and Fort Frances sectors.

A Special air quality statement is in effect for:

High levels of air pollution due to smoke from ongoing forest fires.

Smoke plumes from active fires in the area will continue today and possibly persist into tomorrow. Air quality is likely to deteriorate if the smoke descends to ground level.

Individuals may experience symptoms such as increased coughing, throat irritation, headaches or shortness of breath. Children, seniors, and those with cardiovascular or lung disease, such as asthma, are especially at risk.

Don’t forget – Free Fishing Week is from July 3 to July 11, Ontario families can fish without buying a licence or carrying an Outdoors Card.

A shout out to Kenny Portis who swept (by hand) all the bicycle lanes in Wawa. A shout out to all who supplied him with safety ‘stuff’, stomach fuel, and equipment. Congratulations for a job extremely well done. Wonder where the municipal street sweeper went this year?

Charlie Angus (Member of Parliament for Timmins-James Bay) will be hosting a press conference this morning in Ottawa at 10 a.m. with MP Mumilaaq Qaqqaq. They are calling for an independent criminal investigation into the discovery of the bodies at residential schools.

Christine Elliott, Deputy Premier and Minister of Health, and Solicitor General Sylvia Jones to provide an update on the province’s COVID-19 vaccination plan at 10 a.m.