Flurries and a few local snow squalls ending this afternoon then cloudy with 30 percent chance of flurries. Local amount 5 to 10 cm. Wind up to 15 km/h. High minus 4. Wind chill minus 16 this morning and minus 8 this afternoon. UV index 1 or low.
Tonight – Cloudy. 30 percent chance of flurries this evening. Wind up to 15 km/h. Low minus 16. Wind chill minus 8 this evening and minus 19 overnight. 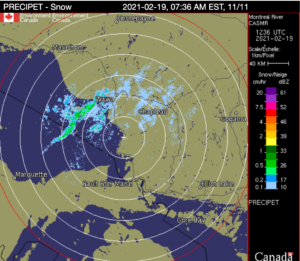 Snow squalls continue today. Snow squalls have developed between Wawa and White River south of Highway 17 and will move into the town of Wawa later this morning. The snow squalls will drift into the Agawa region this afternoon.

Travel along Highway 17 between Wawa and Agawa Bay may become hazardous due to heavy snow and poor visibility. Accumulations up to 10 cm are possible.

Snow squalls may impact the area into Friday afternoon. Travel along Highway 17 between White River and Wawa may become hazardous due to heavy snow and poor visibility. Accumulations in excess of 15 cm are possible, although the shifting nature of the snow bands may limit accumulations. At this point, it appears that the heaviest amounts will occur south of Highway 17. The snow squalls should move east of the region by late Friday.

Travel may be hazardous due to sudden changes in the weather. Visibility may be suddenly reduced at times in heavy snow. Surfaces such as highways, roads, walkways and parking lots may become difficult to navigate due to accumulating snow.

(1) That Algoma Public Health is aware of.

*The number in brackets are active cases in non-Algoma residents who are temporarily in Algoma.  These cases are not counted as part of Algoma’s confirmed case count.  APH conducts contact tracing and monitoring of self-isolation for all cases within Algoma. Editor’s Note: These may be referring to the cases at the Valard Camp in White River)

(3) Patient tested positive but is resolved according to current public health criteria. This number includes any persons who are deceased.

The Hornepayne Snowmobile trail system is getting an upgrade. “Soon, all trails will have mileage markers counting up every 5km from the Esso. On a loop trail, a location close to the half-way point will be used to reverse the mileage. L193 (Cedar Point trail) mileage includes the distance from Trail Ends sign to pumphouse D108A trail. We are also installing landmark signs to dress up the trails and help folks remember where they have been. eg. Creeks, logging roads, etc. The club is asking for help, saying “If you want to help with arts & crafts, shoot me a text and then you can tell your Gr. 1 teacher how good you were at staying between the lines.”

On Wednesday, the Coles bookstore in the Cambrian Mall announced that it is closing its doors after 36 years in business. The doors will close permanently March 7. The Coles bookstore location in the Station Mall will remain open.

Did you know? Today, in 1879 Thomas Edison patented the first record player. In 2010, Pope Benedict approved sainthood for Montreal’s Brother André, the founder of St. Joseph’s Oratory, who was credited with miracle healings before his death in 1937.

Premier Doug Ford will be joined by Christine Elliott, Deputy Premier and Minister of Health, Solicitor General Sylvia Jones, and General Rick Hillier (retired), to provide an update on the province’s COVID-19 vaccination plan at 2 p.m.