You Can’t Get Far Without a Railroad 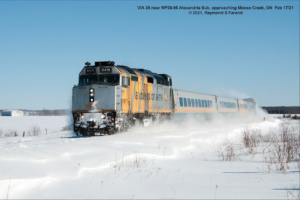 When all the other subsidized modes of transportation fail, the trains still get through, as proven by VIA #35 charging through the snow and cold of the Ottawa Valley on Tuesday. Photo courtesy of Ray Farand.

It’s a fair bet that few Canadian politicians have ever watched the 1957 Jimmy Stewart movie, Night Passage.  If they had, they might have heeded the thought-provoking lyrics of Ned Washington, as sung by Stewart, in that charming film of yore:

Oh, you can’t get far without a railroad,

You can’t get far without a railroad.

Oh, you can’t get far without a railroad.

The pandemic and recent extreme weather conditions have revealed just how inadequate our transportation system has become.  This is due to the politically-directed subsidization that has virtually ignored rail as a key component of what can hardly be called a system and certainly not a resilient one.  A rudimentary air service exists only because of public bailouts on top of decades of direct and indirect subsidies.  Publicly-funded highways, which recover less than 40 percent of their costs in user fees, have been closed for several days in key locations, disrupting supply chains and personal travel that have become overly dependent on them.  There hasn’t been a federally-funded VIA Canadian across Northern Ontario for nearly a year and the Sudbury-White River train has been reduced to once weekly.  Provincially-funded Ontario Northland puts buses on and takes them off faster than most politicians change their promises.

Long-time practitioners and observers of the industry aren’t surprised.  Canadian transportation has become a disjointed series of subsidized services and facilities with no comprehensive plan.  Rail has suffered the most because it has vanished from political and bureaucratic radar screens.  Freight railways have been told to fend for themselves financially, and passenger trains have become unwelcome public wards.

Our railway system has been compelled to perform a striptease.  First to be removed was the passenger trains. Then followed by less-than-carload freight and light-density branch lines.  Continuing the striptease, it was the facilities to serve freight shippers between the major traffic nodes, such as Vancouver, Winnipeg, and Toronto

Do you realize that a container of inbound goods off the Pacific, destined for a Northern Ontario receiver now goes to Toronto and then gets trucked back to the receiver it passed on its way to Toronto? There are no intermodal freight terminals between Winnipeg and Toronto to transfer the containers from rail to truck because, squeezed by indirectly subsidized trucking, the railways jettisoned those facilities long ago.

Author Pierre Berton immortalized the epic story of the building of the Canadian Pacific Railway (CPR) in his two-volume history of its construction.  Years later, he told me Canada had never lost its need for the rail system that had given it the kiss of life, which is why the population still hugs its two primary east-west rail lines.  Berton also pointed out the railways were not the National Dream, which was the vision of a transcontinental nation, but they were keys to making that a reality.  As lyricist Ned Washington observed in his song, you couldn’t get far without a railroad – then or now.

Other nations never forgot the role of rail in making their economies and societies function.  Even the U.S., which ignored its railways to an even greater extent than Canada has, slowly learned its lesson and now increasingly includes rail in balanced transportation thinking.

Virginia, for example, recognized that investing $12.5 billion to build one additional lane of its main north-south highway in each direction for approximately 50 miles – with congestion returning in the peak period the day it opens – wasn’t such a wise bet compared against combining its public funds with private capital to expand and improve the parallel CSX railway line. To solve this challenge, Virginia created an agreement with CSX for a $3.7-billion investment program that Governor Ralph Northam calls “a once-in-a-generation opportunity to make our rail system work better for everyone, both in Virginia and along the entire East Coast.  This agreement will change the future of transportation in Virginia, improving our ability to move people and goods across the state, and opening up potential rail service in underserved parts of the Commonwealth.”

Canadian politicians haven’t come to such an enlightened realization.   Nor have many self-proclaimed advocates who call for a greater reliance on rail… while pushing for their own pet trains in isolation from the rest of the network and always propped up solely with public dollars.  There is little recognition that what is really required is a system solution that views the challenge from both public and private viewpoints.  This system solution must consider the needs of passengers and freight shippers, while also recognizing that the public treasury is not bottomless.  Except in dense urban areas, it’s difficult to justify a railway’s high upfront costs solely on the basis of moving people.

The pandemic, the frequent disruptions of our disjointed transportation services due to extreme weather and other conditions, and the limit to public financing have created an opportunity for Canada.  We need to hit the pause button and craft a new approach to transportation.  It must be one that relies to a greater degree on the benefits of modern rail passenger and freight service, which need to be weighed against the other modes and linked with them. 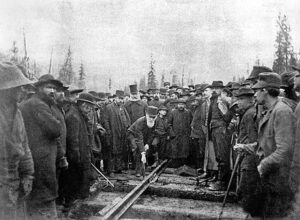 Incorporated on February 16, 1881, the Canadian Pacific Railway (CPR) celebrated the driving of the ‘Last Spike’ less than five years later. A ribbon of steel united Canada when the railway line from the east coast to the Pacific coast in the west was finally completed at Craigellachie, BC on November 7, 1885.

It was just such a collaborative effort that led to the building of the CPR.  The term public-private partnership has been abused and perverted by many on both sides of that equation in recent years, but the history of the CPR demonstrates how it can be applied to the benefit of all.  The public sector bungled its own attempts to span the nation with steel rails.  A private syndicate said it could do it, but couldn’t afford to go it alone.  In euchre, you are always reminded to count on your partner for one trick. The pioneering ‘trick’ was a public-private partnership combining resources to build “the impossible railway” across the Canadian Shield, the Prairies, and four mountain ranges in five years.  A patriotic notion was converted into a practical nation.

In the European Union, 2021 has been declared the European Year of Rail.  Their railways are thriving as components of integrated systems that make the best use of each model.  The same can be said for several other countries with which Canada competes.

Unless we seize the unique opportunity presented by the pause caused by the pandemic – if we simply revive the flawed policies of the past – we’re going to emerge well behind our global competitors in terms of our transportation efficiency and resilience.

Nearly 70 years ago, Ned Washington and composer Dimitri Tiomkin got it right when they wrote You Can’t Get Far Without a Railroad. It’s time for Canadian policymakers to learn and sing that song, and it is a chance for the public to pick up the chorus line in support.

Editor’s Note: The Federal Government is asking for the public’s input into the 2021 Budget.

“As we distribute vaccines across Canada, bold action continues to be necessary to fight COVID-19, save lives, support people and businesses throughout the remainder of this crisis, and build back better. When COVID-19 is under control and Canada’s economy is ready for growth, the government has a plan to make smart, targeted investments that jumpstart the country’s economic recovery and begin to repair the damage done by the pandemic.

These pre-budget consultations are an opportunity for Canadians from across the country to share their ideas and priorities for how the government can make investments to grow the economy. We want to hear your very best ideas on how to create new jobs and build a greener, more competitive, more innovative, more inclusive, more resilient Canada.

Join the conversation by taking our questionnaire, or uploading a submission.”