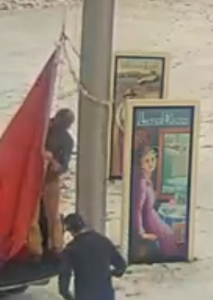 Yesterday afternoon, about 1:30 Municipal staff installed the Canadian Flag out at the Wawa Goose Monument. The flag though, files at half staff in remembrance of Provincial Constable Marc Hovingh, posted at the Manitoulin Detachment, who died November 19, 2020 in the line of duty.

Congratulations to Meagan Duhamel and Wojtek Wolski who were crowned Battle of the Blades Champs last night. Their performance won a $100,000 prize for the Sandra Schmirler Foundation and SickKids.

Nipissing University now has an outbreak involving 14 cases of COVID-19.

Algoma Public Health has joined other provincial health units to ask the provincial and federal governments to implement some sort of basic income.

The Ontario government has cancelled all in-vehicle road tests in regions in the Grey (Lockdown) level. This applies to all road tests in the City of Toronto and Peel Region, including the Brampton, Downsview, Etobicoke, Metro East, Mississauga and Port Union DriveTest Centres; and is effective November 23, 2020. Road test cancellations will be without penalty and Toronto or Peel Region residents may not book a road test at a DriveTest centre in another region. DriveTest clients impacted by canceled tests will receive a credit on the system and may rebook their tests when their region moves to a lower COVID-19 level.

Premier Doug Ford will be joined by Christine Elliott, Deputy Premier and Minister of Health, and General Rick Hillier (retired), Chair of the COVID-19 Vaccine Distribution Task Force, to make an announcement at 10 a.m.