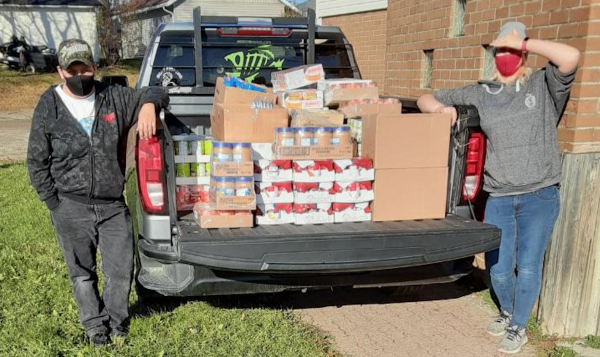 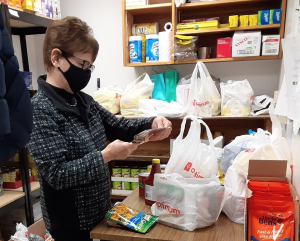 The Wawa Community Food Bank wishes to publicly thank The Bargain Shop for their campaign on our behalf this year, the result being a truck load of food delivered on October 13th.  The amount was almost twice as much as last year and very much appreciated.

Then on November 2nd, the Northern Lights “We Scare Hunger Campaign” spearheaded by Danette Mathias and Lonna Rilley, provided two truckloads of food plus a cheque for $200, delivered by Mark Szekely’s grade 9 class from Ecole secondaire catholique St-Joseph.  This was a strictly local initiative, as Ford Canada had cancelled the event. Those who donated to the campaign included the staff at Lady Dunn Health Centre, the Wawa Family Health Team, Algoma Public Health along with the staff and students at Ecole St- Joseph, St. Joseph French Immersion, Sir James Dunn Public School, and Michipicoten High School.  Northern Lights Ford and customers, and John’s Valumart were also generous donors to this campaign.  As Danette said, “COVID-19 had no chance of stopping us!”
The volunteers of the Wawa Community Food Bank applaud the generosity of our community which is indeed a caring one, particularly during this trying pandemic which has affected everyone in some way.  Our thanks to all who have donated.

Donations of non-perishable food items can be made at John’s Valu-Mart (look for their cart). Food items and plastic shopping bags can also be donated in the black donation bin at the main entrance of 96 Broadway (the former medical center). Monetary donations by e-transfer can also be accepted at [email protected] or mail: Wawa Community Food Bank, P.O. Box 2001, Wawa, ON P0S 1K0.