On August 13, 2020, at approximately 4:40 p.m., members of the Superior East Detachment of the Ontario Provincial Police (OPP) responded to a chemical spill on Highway 17 near Rabbit Blanket Lake.

A commercial motor vehicle was forced to take evasive action in order to avoid a collision which resulted in one of its onboard totes to rupture and leak its contents onto the roadway. The chemical was later identified as a pesticide.  The Ministry of the Environment was advised. 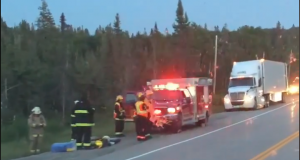