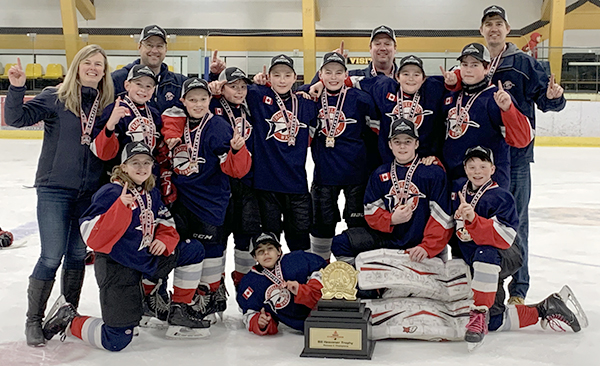 The Wawa PeeWee Travellers travelled to New Liskeard the weekend of March 6-8, 2020 for the Northern Ontario Hockey Association Tournament of Champions.

Their first game against Blind River was a win of 5-1.  The second game against the Powasson Hawks was a hard fought battle ending in a tie of 4-4.  The third and final round robin game in action against New Liskeard saw the team come out on top with a score of 7-3.

The Travellers entered the semi-finals against Powasson Hawks and defeated the Hawks 7-2.

The team was pumped and ready to go to finals where they met up with the Chapleau Huskies which proceeded to be an intense game.  The Travellers were up 4-1 in the third period and figured they had the game all wrapped up when the Huskies showed up with 3 unanswered goals within the last 10 minutes of the game.  With just over a minute left in the game our Wawa Pee Wee Travellers dug deep and finished the game winning 5-4.  The Wawa Pee Wee Travellers were crowned the NOHA PeeWee “C” Champions.

Hats off to the players and coaching staff for their time and commitment to practices and games all season.  Well done!!