It is good to once again have the opportunity to thank a lot of people who have been helping to get the lift installed at the Branch for our elderly and handicapped citizens.
Government of Canada, Terry Anne Strevey. Wawa EDC, Maury O’Neil, Jessie Labonte, Shaw Mohamed.
Municipality of Wawa, Mayor Ron Rody, and Council, Kevin Sabourin.
A1 Signs, Jim Aquino and Ashley Whorpole.
Regional Employment Help Centre, Russell Reid, Lisa Weaver, and Mathew Hart.
All Contributors who made donations to the Legion Lift Campaign, Major and Anonymous: Rotary Club of Wawa, MGP Architects & Engineers, Wayne Mezzomo and Associates, Mike Moore Construction Ltd., Savaria, MacIntyre Trucking, 85 Electric Ray Brisson, Everything Floors, Michael Allemano. Jules Anglehart, Mike Ashford.
Legion President and officers, executive and members of Branch 429  and Ladies Auxiliary.
I apologize for any errors or omissions.
And 75 years ago on the Woeste Hoeve in the center of Holland 140 imprisoned citizens were executed as a reprisal of an
operation by the underground on a Military Staff car. A memorial Service was held this weekend.
This fellow in Northern Ontario made a Sea aquarium but needed some seawater but did not know where to buy it. So, he drove to Halifax with his pick up and saw a Nova Scotian fishing at the beach and asked him if he could fill up his barrel. The fisherman said “Okay but it costs $5.00”.
When he got back home he was still short of seawater because he had spilled some along the way.
So he made another trip back to Halifax and the beach but this time it was low tide.
So he saw the same fisherman and told him “I see you have sold quite a bit of water since I was here!”
To all our Comrades sick at home, in the hospital or nursing homes you are in our thoughts and prayer and we wish you well. 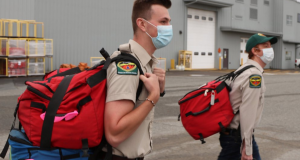