Metered Water Billing to be implemented next year

On November 5th Council Meeting, Municipal CAO Maury O’Neill made a presentation to Council and the gallery about the impending Water Metering Billing. The province of Ontario has mandated that municipalities achieve full cost recovery for water treatment.

The water meters were installed over 2103/14 in residences and businesses. This was because the current rate structure is based on the number of fixtures (tubs, toilets, taps) and not on the actual usage. The installation of the water meters has been plagued with residents pushing back against their install, inconsistent readings and software implementation. Council has supported metered billing because it means that users will pay the true cost of water based on their consumption, encourage water conservation and full cost recovery from water bills.

Currently, Wawa has 1,319 metered users and it costs $1,015,000 to run the water plant. Proposed is a fixed fee (to run the plant) and a variable rate (for water consumption). The fixed rate or 70% of the bill is based on the size of waterline entering the meter (residence/business).

Council is planning three billings per year, January to April, May to August and September to December, with a move to quarterly or bi-monthly in a few years.

Waste water will also be calculated similarly with a fixed and variable rate. $435,000 is required to run the waste water services with 1,228 metered users and an estimated volume of 480,000 m3.

The variable rate is 30% or a charge of 27.2 cents/m3. There was a note made during the presentation that this calculation doesn’t include the Mission, Pinewood Drive and the Industrial Park. It was also noted that further review is required for the Commercial Meter Rate, Residential Multi-Units and Trailer rates, replacement meter surcharges, a minimum charge for vacant and inactive accounts, allowance for bad debts, inconsistent accounts (ie, extreme high or low recorded usage).

Significant Snowfall expected over the weekend 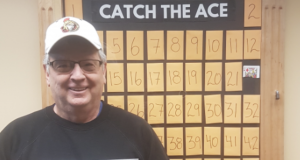