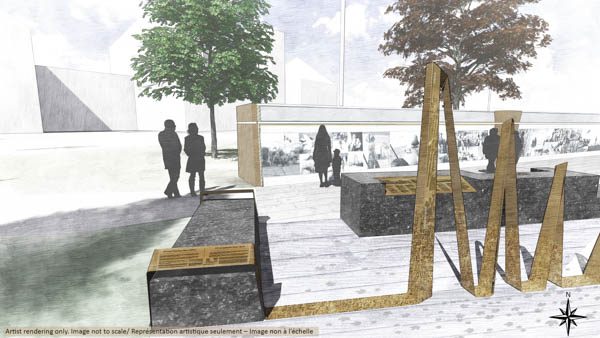 Today, the Ontario government unveiled the design for the Memorial to Honour Canadian Heroes of the War in Afghanistan, a monument to honour the veterans and the fallen members of the Canadian Armed Forces who served in Afghanistan.

“During the war in Afghanistan, more than 40,000 Canadian soldiers fought with courage and honour to defend our values and keep the world safe,” said Premier Doug Ford. “Canadians are forever grateful for their bravery and our government will always stand shoulder-to-shoulder with our nation’s veterans and troops.”

The memorial will be located on the south lawn of Queen’s Park within the footprint of the Ontario Veterans’ Memorial. It was designed to complement the existing war memorial to create a seamless timeline of Canada’s military history. The new memorial will consist of granite and bronze elements etched with images from the war that tell the story of Canada’s involvement in the conflict. 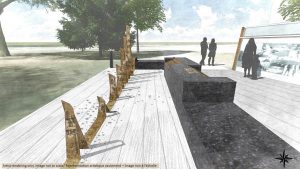 “This memorial will serve as a lasting legacy to the Canadian soldiers who served in the war in Afghanistan – including those who tragically lost their lives,” said Lisa MacLeod, Minister of Heritage, Sport, Tourism and Culture Industries. “Ontarians will forever have a space to show their respect and gratitude to these brave men and women on the legislative grounds. Thanks to the dedication of the consultation panel, the final design is a fitting tribute to the sacrifice, bravery and determination of these heroes.”

The memorial was designed by PFS Studio with input from a consultation panel, chaired by General (Ret’d) Rick Hillier, who commanded a NATO mission in Afghanistan and was Chief of the Defence Staff of the Canadian Forces from 2005 to 2008.

“It is a privilege and honour to support the design and build of this memorial,” said General Rick Hillier. “It will be a touchstone for veterans of the war and their families for years to come, showing respect and appreciation while eliciting emotion, memories and pride.” 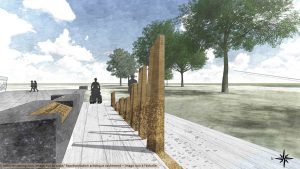 The government is also exploring ways to recognize the skills, training and experience veterans bring to the Ontario Public Service (OPS). The OPS is working with managers to ensure they are aware of the employment policies that recognize the qualifications of veterans while supporting veterans who are already in the OPS to connect with peers with shared experiences. These initiatives could assist veterans in building a successful career of ongoing public service.

The Memorial to Honour Canadian Heroes of the War in Afghanistan was designed to complement the existing Ontario Veterans’ Memorial and create a seamless timeline of Canada’s military history. The memorial’s design features granite and bronze elements that tell the story of Canada’s involvement in the Afghanistan conflict through imagery and symbolism.

A fallen maple leaf pattern inlaid within the pavement will connect the two memorials and represent a continuation of time. This pattern of bronze leaves will create a pathway from the existing memorial wall to the new memorial.

A granite bench on the west side will mark the beginning of the new memorial. It will give visitors a place to take a moment to remember and show gratitude to the 158 fallen members of the Canadian Armed Forces who did not return from Afghanistan.

When viewed from the south, the end of the existing memorial wall and the beginning of the new memorial will create a subtle frame. The view through this frame centres on imagery of Canadian operations in Afghanistan on the Ontario Veterans’ Memorial. When viewed together, the tall bronze elements that create the view-frame are reminiscent of the twin towers before terrorists attacked the World Trade Centre on September 11, 2001.

A continuous piece of bronze will bend and fold into seven vertical elements, representative of Canada’s involvement in the conflict.

When viewed from the north of the memorial, the shape of the ribbon-like bronze will resemble the silhouette of Afghanistan’s mountainous landscape.

The sharply angled folds of the memorial’s form will mimic the deep, shadowed valleys and steep gullies that characterize Afghanistan’s rough terrain. This landscape contributed to the daily challenges faced by Canadian troops throughout the conflict.

Images etched into the peaks of bronze will further tell the story of Canada’s involvement in the conflict from October 2001 to March 2014. The rough, rocky landscape of Afghanistan will inspire the texture of the bronze and ground below.

A stone from an Inukshuk, which was dedicated to the fallen and erected by Canadian soldiers at Kandahar Airfield, will be incorporated into the existing granite bench. Visitors will be able to touch this stone and physically connect to its source, almost 11,000 km away.