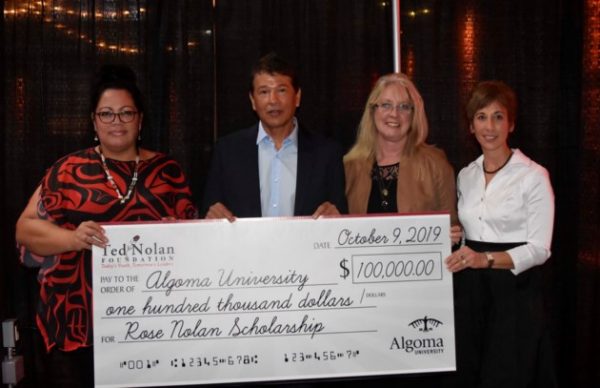 Last night, close to 250 delegates from across Canada attended a gala dinner at the Machine Shop which was organized as part of the 5th annual Building Reconciliation Forum, hosted by Algoma University in partnership with Shingwauk Kinoomaage Gamig, Nipissing University, Cape Breton University and the University of Northern British Columbia, with support from Universities Canada.

As part of the evening’s agenda, keynote speaker Ted Nolan delivered a powerful message that reinforced the importance of post-secondary access for Indigenous people, especially women. Nolan, former NHL Coach of the Year, has also been recognized as Citizen of the Year, National Role Model, Member of the Order of Ontario, Recipient of the National Aboriginal Achievement Award while founding the Ted Nolan Foundation. The Foundation is committed to the healing process to renew and revitalize the mind, body and spirit of First Nations youth and the Rose Nolan scholarship, intended for First Nations women achieving their education.

“As the proud son of the late Rose and Stan Nolan, and growing up in Garden River First Nation, I was always blessed by being surrounded and supported by strong women. My six sisters, my wife Sandra and my mom Rose. Without them, I would have never been half the man I am today. My mom, Rose, demonstrated to me early in life that a strong family, a strong community and a strong nation begins with our women,” stated Ted Nolan.

“Algoma University is so pleased to be able to announce the establishment of a scholarship in the name of Rose Nolan, creating additional opportunities for women from First Nations communities to pursue their academic goals. It is fitting that we were able to make this announcement tonight during a national gathering of university leaders from across Canada,” stated Asima Vezina, President and Vice-Chancellor of Algoma University.

The 5th annual Building Reconciliation Forum, an event supported by Universities Canada, brings together leaders from universities, colleges and Indigenous communities to create meaningful and lasting institutional change in the higher education sector to advance reconciliation.

Those in attendance also had the privilege of being entertained by the nationally renowned group The Jerry Cans / Pai Gaalaqautikkut. These fast rising northern stars create music inspired by their hometown of Iqaluit, Nunavut. With their unique mix of Inuktitut alt-country, throat singing, and reggae, the Jerry Cans are a distinctly northern, one-of-a-kind group.

SOURCE – Algoma University, established in Sault Ste. Marie in 1965, offers a wide range of degrees and certificates spanning the liberal arts, sciences, and professional disciplines.  The university also offers programming at campus locations in Brampton and Timmins. Algoma University has a special mission to cultivate cross-cultural learning between Indigenous populations and other communities.  For more information, please visit www.algomau.ca.