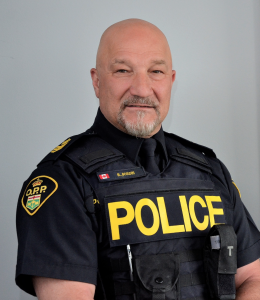 Staff Sergeant Bordin began his career with the OPP in September 1996. His first posting was to the Killaloe Detachment in East Region. In 1997, he transferred to the Thessalon OPP Detachment where he worked for eight years before transferring to his hometown of Sault Ste. Marie.

From 2008-2010, Staff Sergeant Bordin was seconded to the OPP Drug Enforcement Section and worked as part of their street team. In 2016, he had the opportunity to work as part of the North East Region Critical Incident Stress Response Team as an Acting Sergeant.

“I am very proud to have been selected to lead the dedicated officers of the Superior East Detachment. I look forward to continuing the investigative excellence expected of the OPP for the communities we serve. Together, with our team of professional, skilled officers, we will continue to keep our communities safe working in partnership with our community leaders. I am grateful for this opportunity.”