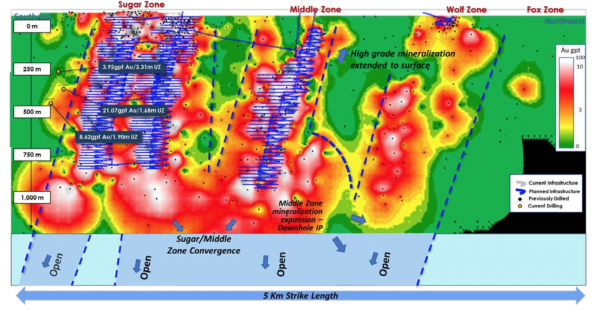 Harte Gold is pleased to provide the following exploration update:

o Drilling results were returned from the Upper Zone area of the Sugar Zone, expanding the mineralized envelope an additional 200 metres on strike to the south

o Step out drilling will continue to test the extent of this new zone on strike and down dip
 Exploration at the Hambleton Lake and K7 areas returned anomalous gold values up to 730 ppm (0.73 g/t) Au in strongly altered porphyries and intermediate tuffs

 The Company is ramping up its drill program for 2019, targeting two rigs for near mine areas (Sugar, Middle and Wolf) and two rigs for property-wide exploration.

o Approximately 11,000 metres were drilled year-to-date, down from previous years while the Company focused on the ramp-up of operations

o Near mine drilling will focus on the southern extension of the Sugar Zone and convergence of the Sugar, Middle and Wolf zones at depth

o The Company is pleased to announce permits were received allowing the Company to expand its exploration program to additional high priority targets (see image below), identified through geophysics and prospecting over the past 12 months

Stephen G. Roman, President and CEO of Harte Gold, commented “The exploration permits we have received provide a green light to really accelerate our regional field program. With work completed over the past year, the Company has many prospective areas that have never been explored.”

About the K7 Area

The K7 Area is located south of the Sugar Zone Mine. Drilling continues to intersect wide intervals of feldspar porphyry in proximity to a mafic volcanic/sedimentary contact. Anomalous gold values up to 0.73 g/t Au were intersected within a moderately silicified feldspar porphyry. Additional anomalous intersections were intersected within moderately silicified porphyry and iron formation respectively.

A VLF survey was completed in the K7 South Area covering the same volcanic / sediment contact to define potential drill targets in this area. Several prospective VLF trends were outlined from the survey. A geological mapping and sampling program completed last year in this area outlined several altered mafic volcanic and feldspar porphyry outcrops with anomalous copper values to 1,750 ppm and gold values up to 1 g/t.

About the Hambleton Lake Area

Drilling at Hambleton Lake confirmed an extension of the Fisher Zone with drilling intersecting several altered mafic volcanic and porphyry units with widths up to 22 metres, accompanied by 1-2% pyrite and pyrrhotite. Several holes returned anomalous zinc values in iron formation most notably HG-19-27 which assayed 0.44% zinc over 0.35 metres and

hole HG-19-26 which assayed 0.27% zinc over 0.67 metres. Deeper drilling is currently being planned to test the outlined alteration system and iron formations down dip. 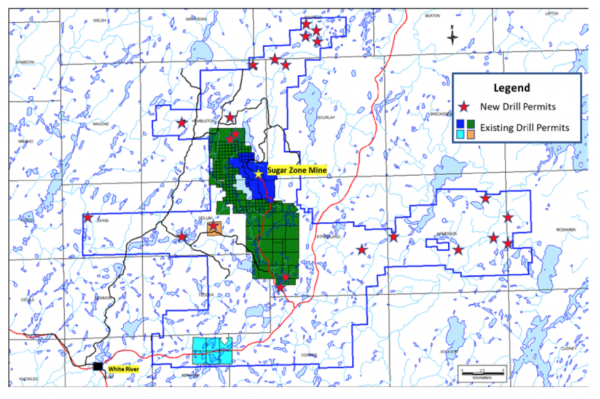