The 20th annual Shadows of the Mind Film Festival is set to run Feb. 23 to March 3, 2019 in Sault Ste. Marie and an extra special gala is planned to kick off the occasion. Shadows of the Mind Film Festival is pleased to announce the film Giant Little Ones, has been confirmed for the 20th anniversary gala screening. The coming-of-age film shot in Sault Ste. Marie was recently selected as one of the Toronto International Film Festival’s top 10 Canadian features of 2018. It was also a TIFF People’s Choice Award nominee.

This will be the first year the Shadows Gala will be held at the Sault Community Theatre Centre, but this location was selected as a nod to the Festival’s origins, where in 1999 the film reel rolled on and a new annual tradition began. In its 19-year history, Shadows has grown from a three-day to a seven-day festival featuring Oscar buzz and critically acclaimed films and documentaries from around the world. Over 3,500 filmgoers attended last year.

Cost-saving ‘five movie vouchers’ are currently available online by visiting the Shadows of the Mind website. Movie tickets will go on sale online and at the Shadows Box Office in the Station Mall starting Feb. 13.

While titles are still in the process of being selected and confirmed, movie buffs are encouraged to keep checking the Shadows of the Mind website and social media feeds for updates.

About Shadows of the Mind

Shadows once again brings to Sault Ste. Marie a film festival that meets the mandate of providing insights into mental health, addictions and current social issues through the lens of exciting, unique and entertaining movies and documentaries. 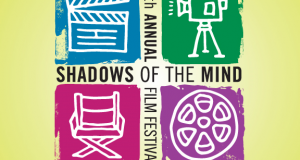