On December 2, 2018 at approximately 11:00 p.m. an officer of the Ontario Provincial Police (OPP) Manitouwadge detachment was on patrol when he observed a motorized snow machine (MSV) driving on a roadway in Manitouwadge. The MSV was traveling in the center of the roadway and when police attempted to stop the MSV the driver failed to stop.

The officer followed the MSV to his residence where the officer was able to speak to the male driver. After further investigation it was determined that the driver was impaired by alcohol. The male driver was arrested for Impaired Operation of a MSV. He was transported to the Marathon OPP detachment where he supplied two breath samples confirming his impairment.

The drive, Dean MONGRAIN a 47 year old male from Manitouwadge, ON was charged with:

The male was later released and is to appear at the Ontario Court of Justice in Manitouwadge on February 20, 2019 to answer to the charges.

Motorists who drive impaired by alcohol or drugs are subject to drivers licence suspensions, fines, vehicle impoundments, criminal records and increased insurance costs. Please drive responsibly and don’t drink and drive. The public is encouraged to call 911 or contact police at 1-800-310-1122 whenever suspecting that a driver is impaired while operating a motor vehicle whether it is a Car, Truck, Motorcycle, ATV, Snowmobile, Boat or even an Airplane. 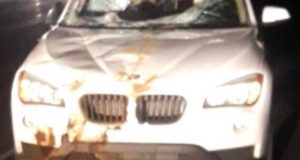 Marathon and Manitouwadge OPP Warn of Wildlife on Highways