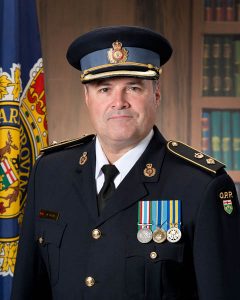 Superintendent Pilon has 24 years of policing experience. His career began at the Cochrane Detachment in 1994 before joining the Precious Metals Enforcement Unit in South Porcupine from 1999-2002. He returned to Cochrane where he was promoted to the Area Crime Supervisor in 2006. In 2010, Mike assumed the role of Staff Sergeant – Operations Manager at the James Bay Detachments. In 2012, he completed a United Nations stabilization mission in the Democratic Republic of Congo. In 2015, he was promoted to Inspector Detachment Commander for the James Bay Detachments. 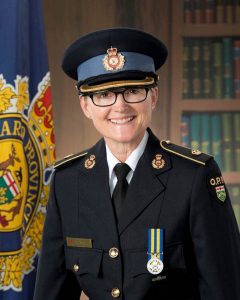 Inspector Cathy Bell has assumed the Manager of Staff Development and Training portfolio.

Inspector Bell has 28 years of policing experience. Her career started with the Sault Ste. Marie Police Service and in 1994 she became a member of the OPP at the Thessalon Detachment. From there she transferred to Orillia where she worked at detachment and in a number of other areas becoming the first provincial Amber Alert Coordinator. In 2000, Cathy was promoted to Sergeant and transferred to the Information Technologies Bureau. In 2006 she was promoted to Staff Sergeant Executive Officer and after several assignments moved to Municipal Policing Bureau in 2012. Cathy then worked in OPP Uniform Recruitment as Acting Inspector until being promoted to Inspector Detachment Commander in the City of Kawartha Lakes in 2015. 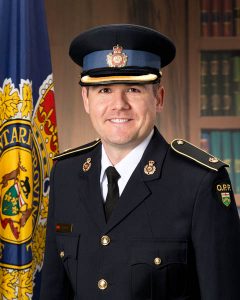 Inspector Sturgeon joined the OPP in 2006 and served at the Longlac and Greenstone Detachments in the North West Region. While there, he was primarily involved in major crime investigations before being promoted to the rank of Sergeant in 2013. In 2016 he was promoted to the rank of Staff Sergeant – Operations Manager at the East Algoma Detachment.

Congratulations are extended to these members as they embark on new and challenging responsibilities within NER.