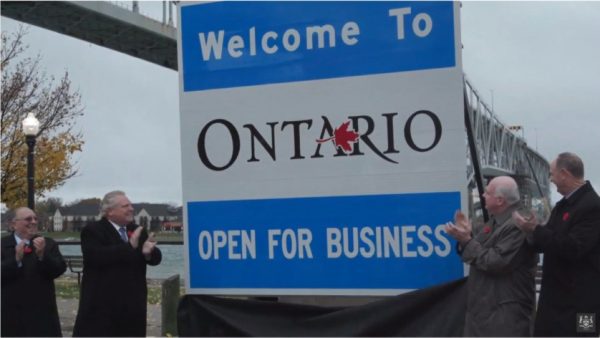 Doug Ford has revealed that just a partial cost for his useless highway signs is $106,700 – money NDP International Trade critic Taras Natyshak said won’t actually increase trade. Ford has only revealed the manufacturing and shipping costs of the signs – not staff time, installation contractor bills, or what is sure to be a small fortune in having Ford and his entourage travel the province to unveil the unremarkable signs and pose for photos.

“This money belongs to the people of Ontario. Ford has fired up the gravy train, and the rest of us are paying for it,” said Natyshak. “We’re shelling out a hundred-grand for a sign that will do nothing, while Ford ducks trade meetings and skips out on having an actual trade strategy. We’re ponying up literally millions of dollars for Ford’s friends — Reubin Devlin, Gavin Tighe and Ian Todd — to get sweet patronage appointments. And who knows how much we’re paying for his vanity project, a bogus news channel that spreads propaganda and false information.

“It’s becoming really clear that Ford will chose pet projects and political patronage over real people. It would take a person earning Doug Ford’s reduced minimum wage over three and a half years to earn enough to pay for these signs – even longer when you add all of the costs he’s hiding.”

Natyshak noted that trade signs are not expected to have any effect at all on trade.

“People didn’t vote for this kind of brutal disrespect of people’s money. Ontarians deserve so much better.”