David Archibald, the Happiest Camper in Ontario is touring in a 30 park concert tour. He has written five sings to help celebrate Ontario Parks’ 125th anniversary! David says “I’m thrilled to embark on this grand tour of 30 parks to help celebrate the 125th anniversary of Ontario Parks. It’s a fantastic job! I will unleash five new songs including “The Happiest Camper in Ontario,” as well as return to old favourites such as “Five Great Lakes,” “Poison Ivy,” and “The Ballad of Pirate Bill.””

Judy reminds all that Gluten Free, Vegan, and Vegetarian options are available when requested when you make your reservation. Dinner will be served at 6 p.m. Call 705-856-2939 to reserve your seat. Dinner is served at 6 p.m. and the House Concert will begin at 7:30 at a cost of $15 and a donation to the Wawa Food Bank is always appreciated! If you can’t make dinner, you’re still absolutely welcome at the concert. 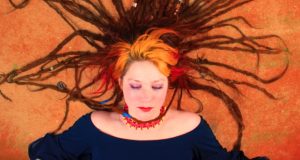