Reminiscent of 2009, the Huron Central is once again threatening to discontinue service by the end of this year. Back in 2010, the two levels of government ponied up $33 million to assist this railway with track improvements. Its parent company, Genessee and Wyoming (GWRR) says it needs a combined 46.2 million from the government over the next 5 years. So, reading into this, does it mean that in 2023 they will be asking again.

This rail line and the Ottawa Valley line (a sister company) are owned by CP Rail yet they (CP) provide no money to assist in track maintenance. However, CP expects to get all the freight from this line at Sudbury and not only controls the routings but the rate structure as well.

GWRR is a U.S. based multi-national railway company with 114 short line railways in its stable. According to records, their 2017 financial statement reveals combined revenues of   U.S.$2.2 billion and net income of U.S.$549 million. Should they not be funding their own rehabilitation needs like other railways?

The Province of Ontario owns the Ontario Northland Railway that has made a substantial comeback from the past and every indication is it is a modern, efficiently run railway. It operates from a point just west of Hearst through Cochrane to North Bay and up to Moosonee. As it interchanges with the Ottawa Valley at North Bay and the OV with the Huron Central in Sudbury makes the Ontario Northland a prime candidate to takeover these two GWRR operations.

Doesn’t it seem logical that if a provincial government is going to provide funding for a rail line that it should own it or at least have operating authority on it? With all of the advocating for the return of passenger train service in the north, The Ontario Northland is the best choice for this to occur and bring a much needed service to northerners along with the economic and public benefits. It is a proven fact, passenger trains are environmentally friendlier than all other means of transport.

The time for action is now. CP Rail should give up its ownership of these rail lines and the province should act quickly to secure them and protect our northern industries who rely on rail. Restored passenger trains should be next in line. 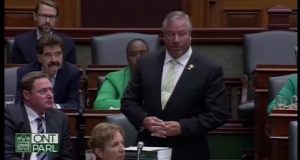