NOWW celebrates 20 years with one of its biggest contests yet 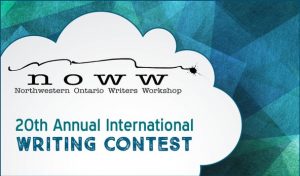 Writers across the region who may be the next literary star of Northwestern Ontario, or maybe trying writing for the first time, or simply have a story inside dying to be told, are once again being given the opportunity to shine during the annual Northwestern Ontario Writer’s Workshop writing contest.

“Each year NOWW’s annual writing contest does something bigger and better,” said Jodene Wylie, contest coordinator. “If you’re a reader and a writer – we want to impress you and motivate you to pull out that pen, pull up to your computer and get writing.”

Once again, NOWW is looking to some of Canada’s most celebrated literary figures to judge this year’s contest. 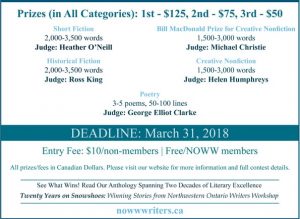 “One of NOWW’s goals this year was to bring some of the best authors from across Canada to judge our writing contest,” Wylie said. “ The calibre of their writing is outstanding. They’re award-winning, they’re well published, and they’re iconic. Having authors like them judge our contest is a real honour and such a great way to kick off our contest this year.”

According to Wylie, last year’s writing contest was a huge success with more than 160 writers from across the country, and even the world, entering a piece of work.

Despite so much competition, Wylie encourages anyone with a story to tell to enter this year’s contest, saying the NOWW Annual Writing Contest provides writers with an opportunity to express themselves and experiment with new ideas, concepts, and genres.

The contest closes on March 31, 2018, and the winners will be announced at the NOWW Literary Gala on May 5, 2018. Full contest details including bios of the judges can be found on our website: www.nowwwriters.ca