NDP candidates John Rafferty (Thunder Bay-Atikokan) and Lise Vaugeois (Thunder Bay-Superior North) joined Horwath in front of the Thunder Bay Hospital. From April 1 to Aug. 31, the Thunder Bay Regional Health Sciences Centre was in gridlock 90 percent of the time, a sharp increase from 20 percent gridlock during the same period last year. At times in November, the hospital built for 375 patients was 50-patients overcapacity.

“People who count on the Thunder Bay Hospital are facing gridlock the majority of the time,” said Horwath. “Those who arrive in need of help are waiting too long, only to be eventually moved onto a stretcher in a hallway. Their wait times, their dignity, their recovery and even their health are compromised. It’s not acceptable to families, and it’s not acceptable to me.

“But, it doesn’t have to be this way. I will make health care a priority again, funding hospitals at or above inflation, and really recognizing the unique needs of communities like Thunder Bay. A plan that offers hope is one that recognizes our families’ health comes first, and guarantees that care will be there when we need it.”

Kathleen Wynne has starved hospitals with funding freezes and cuts, including shortchanging them by another $300 million this year. Before Wynne, the Conservative government gutted hospitals by firing 6,000 nurses, closing more than 7,000 beds and shuttering 28 hospitals.

“Hospital overcrowding is the concern I hear about most often in the community,” said Vaugeois. “Even hospital administrators have said this year has been really tough – and we haven’t even hit flu season yet. Kathleen Wynne has let us down here in Thunder Bay. And for the millions of Ontarians eager for change, it’s becoming clear that Patrick Brown isn’t the answer. His plans for deep cuts have folks worried, and I don’t blame them.”

Brown’s platform vows to cut $6.1 billion in jobs and services – but he won’t tell Ontarians what he’s planning to cut.

“Thousands of nurses being fired, or fewer hospitals in the north, is the last thing we need,” said Rafferty. “Instead of cutting hospital budgets, Andrea wants to end hallway medicine in our province and I’m with her all the way. The solution to our overcrowding crisis is a premier that’s committed to making sure that when our families rush to the ER in need of the best care, we’re going to get it.” 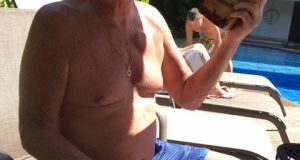